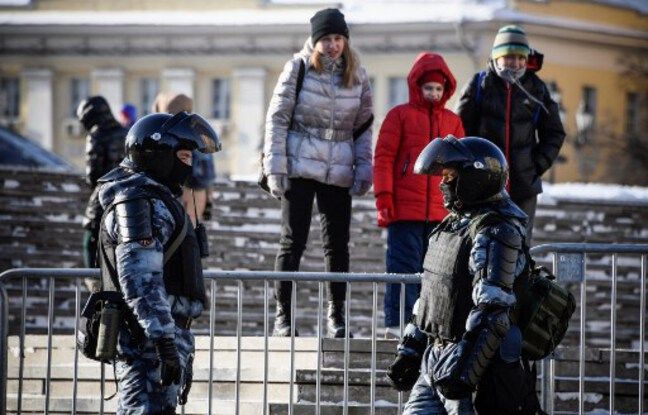 Moscow on Tuesday described as “traitors” the relatives of the jailed opponent Alexeï Navalny for having discussed with the EU sanctions against senior Russian officials, the Kremlin citing the adoption of a new law to punish them.

Russian President Vladimir Putin’s No.1 detractor team further called for supportive flashmobs on February 14 at 8 p.m. in Russia, asking Russians to come out into their apartment buildings with a phone, lamp or candle. the hand.

Putin’s relatives and supporters in the sights

One of Alexeï Navalny’s closest associates announced Monday evening that he had “discussed with representatives of EU countries” a “package of targeted sanctions” which would target the “closest circle and the supporters” of the Russian president .

The people targeted would notably be the oligarchs Roman Abramovich and Alicher Ousmanov, the pro-Kremlin television presenter Vladimir Soloviov, the director of the Pervy Kanal channel Konstantin Ernst, the banker Andrei Kostine or even Igor Chouvalov, a former senior government official.

These sanctions would also concern the children of the secretary general of the Russian Security Council, Nikolai Patrouchev, whose son is Minister of Agriculture, and of the director of the security services (FSB), Alexandre Bortnikov, themselves already sanctioned.

The Polish delegation to the European Union confirmed on Twitter the holding of this meeting by videoconference with Leonid Volkov and Vladimir Achourkov, another collaborator of Alexeï Navalny, in the presence of the “permanent representatives of the 27 alongside the ambassadors of the States. United, Great Britain, Canada and Ukraine ”.

This initiative was mocked by Moscow, the spokeswoman for Russian diplomacy Maria Zakharova denouncing a “betrayal”. “It is totally incomprehensible to me to see how people who talk about the future of Russia can run to those who see Russia as their adversary,” she told Rossiya 24 television. of the Kremlin, Dmitri Peskov, for his part considered it appropriate to legislate to qualify as “criminal acts” the calls for sanctions against Russia.

A bill in this direction is being drafted, according to the chairman of the Duma, the lower house of Parliament, Vyacheslav Volodin. “It is obvious that such an initiative will enjoy wide support,” commented Dimitry Peskov.

The idea of ​​such a text has been discussed since a call from Navalny allies to sanction 35 senior Russian officials addressed to US President Joe Biden. Russia is already targeted by multiple Western sanctions, in particular for the annexation of Crimea in 2014 and the poisoning of ex-double agent Sergei Skripal in 2018.

The EU increases criticism and sanctions

The EU has repeatedly called for the release of Alexei Navalny, imprisoned on January 17 and who has been sentenced to nearly three years in prison. He believes that the Kremlin is trying to silence him by imprisoning him, after failing to kill him in August by poisoning him. The Europeans accuse Moscow of refusing to investigate this poisoning, which has led the 27 to already sanction several senior Russian officials.

They also denounced the repression of pro-Navalny demonstrations at the end of January and the beginning of February which gave rise to thousands of arrests, the authorities arguing of the “unauthorized” nature of the gathering, in particular because of the pandemic.

Testifying to the scale of Russian-European tensions, Moscow expelled three European diplomats on Friday, accusing them of participating in opposition rallies. A political slap, the head of European diplomacy Josep Borrell being in Russia precisely that day.

The three countries concerned responded by declaring three Russian diplomats personae non grata and the EU is considering, against a background of internal differences, the advisability of new sanctions.