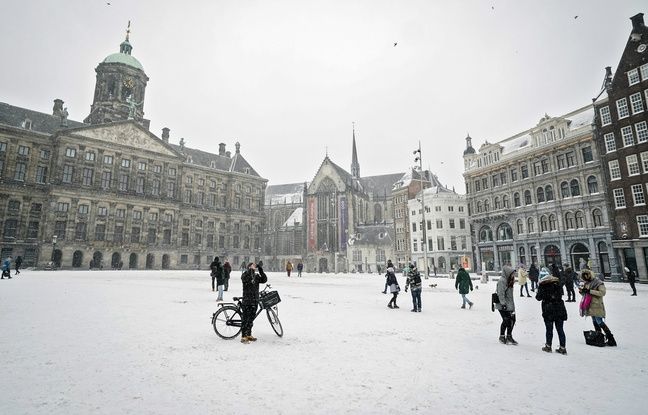 The Netherlands was hit on Sunday by a heavy snowstorm, the first in 10 years, disrupting rail and road traffic, as a cold front swept through northern Europe. Rail services were also affected in Germany, while on the other side of the North Sea, Great Britain prepared for the arrival of this storm named “Darcy” by Dutch meteorologists.

“This is the first snowstorm (in the country) in a long time: the last (…) was in January 2010”, according to the weather forecast website Weer.nl. The Dutch meteorological agency KNMI issued a “code red” alert across the country on Sunday due to winds that could reach 90 km / h and “freezing cold”.

Snow plow in the ditch

The Dutch government has closed all coronavirus testing centers for several days, due to the severity of conditions, as the country expects to experience ten days of freezing temperatures. Most parts of the Netherlands were covered with 5-10cm of snow on Sunday, but the white blanket was up to 30cm thick in places, according to the public broadcaster NOS. All trains were canceled in the country until at least Sunday noon, rail operator NS said.

About 85 cars had come off the road after slipping on snow, according to the Dutch Infrastructure Authority, which advises motorists to avoid driving. A photo tweeted by local authorities showed a snowplow that had fallen into a ditch.

Negative temperatures have also raised hopes in the Netherlands that the canals will freeze, in this melted ice skating country. Prime Minister Mark Rutte has announced that skating will be allowed if the canals freeze for the first time since 2019, while reminding the Dutch of the need to respect social distancing and not to fall so as not to clutter already overcrowded hospitals .

Hopes of being able to organize for the first time since 1997 a legendary speed skating race much appreciated in the Netherlands have been dampened, however, due to restrictions linked to the coronavirus. This 200-kilometer ordeal crossing 11 towns, the Elfstedentocht, has not taken place for more than two decades due to climate change.

Britney Spears takes a rest away from social media