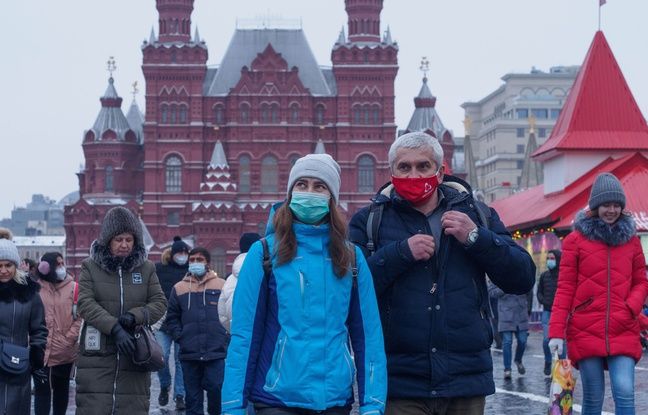 Before affirming in mid-December that Russia had “better” managed the pandemic than in the West, Vladimir Putin might have had to turn his tongue seven times in his mouth. The Russian government admitted on Monday some 186,000 deaths due to Covid-19 this year, a toll more than three times higher than the official count and which makes Russia one of the most bereaved countries in the world.

These new figures are based on a broader definition of victims infected with the virus, under new accounting closer to international standards. They oppose those published daily by the government, which only counts Covid-19 deaths confirmed by autopsy.

On Monday, the Rosstat statistics office therefore reported an excess of mortality between January and November of 229,700 people, up 13.8% compared to the same period of 2019. And “more than 81% of this The increase in mortality over this period is due to Covid and the consequences of the disease due to the coronavirus ”, that is to say a little more than 186,000 deaths, indicated the Deputy Prime Minister in charge of health, Tatiana Golikova.

This toll is more than three times higher than the 55,265 official deaths recorded since the start of the pandemic by the government. Importantly, according to Rosstat, in November alone, 25,788 people died as a result of contamination with the virus. The agency classifies these deaths into three categories: confirmed deaths caused by Covid-19; those whose virus is suspected as the main cause of death; and those where Covid-19 has accentuated other pathologies, causing death.

Rosstat figures now place Russia third in the world in terms of deaths, behind the United States (over 330,000 dead) and Brazil (over 190,000). In October, according to Rosstat, Russia had already recorded 50,000 more deaths compared to 2019, including 22,761 deaths linked to the coronavirus.

Records every week with winter

In terms of contamination, Russia remains in 4th place in the world, with 3,078,035 cases of Covid-19 identified, according to the Russian government. Since the start of winter, the country has been breaking records for new daily infections every week. The most affected city remains the capital, Moscow, and its region, as well as the second city of the country, Saint Petersburg. But the situation is also worrying in the poorest and often under-equipped regions.

The Kremlin nevertheless rejected the idea of ​​any new national containment, after that of spring, in order to preserve the economy, deeming itself well prepared and counting on the effectiveness of its vaccine, Sputnik-V, which was deployed at the beginning. December. However, most regions have imposed the wearing of protective masks and limited access to certain places of recreation.