New mobilization against the establishment of an Amazon warehouse 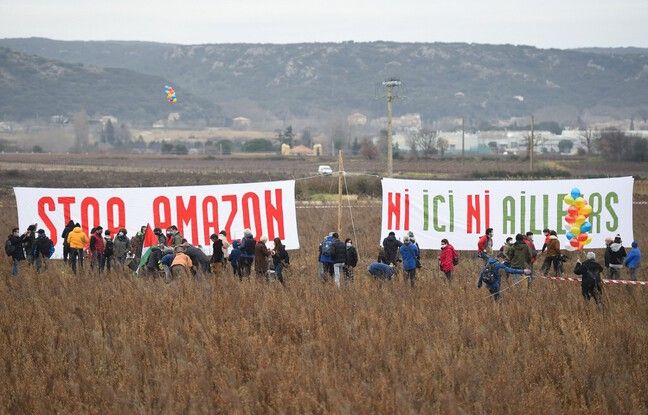 More than a hundred activists and citizens gathered this Saturday morning to protest against the establishment of a warehouse of the American online commerce giant Amazon, near the protected site of Pont du Gard. “Stop Amazon”, “Neither here nor elsewhere”, have inscribed on two huge banners suspended in the trees the opponents of the project to build a warehouse of 38,000 m2 in the town of Fournès a few kilometers from the famous Roman aqueduct inscribed on the World Heritage list by Unesco.

Debates and workshops, “devoted to possible alternatives” to the Amazon project should animate the day. On January 30, a day organized by the same collective made up of unions and associations mobilized nearly a thousand people. “Since January 30, the situation has not really changed since legal remedies are still in progress,” explained Raphaël Pradeau, national spokesperson for the Attac association.

“Everyone has a good reason to oppose Amazon”

“But our mobilization has strengthened” added the activist who believes that “everyone has a good reason to oppose Amazon”: “the establishment of a warehouse hinders agriculture, beekeeping, biodiversity and in terms of working conditions, Amazon’s practices are catastrophic, ”denounced the spokesperson. “I want to defend this land, I fight the waste of agricultural land against the presence of trucks, but also against pushing people to consume”, shares Isabelle Peguin, resident of Uzès (Gard)

Amazon management recalls for its part that it employs “more than 11,500 people in France and is proud to offer them a wide range of professional opportunities”. “Through its activity, Amazon has enabled the creation of more than 110,000 indirect jobs in France,” she underlines. “In addition, Amazon is developing ambitious projects to protect the environment and achieve carbon neutrality from 2040, ten years before the objective of the Paris Agreements”, assures the company.