New night of Israeli shelling of Gaza, around 200 dead in one week 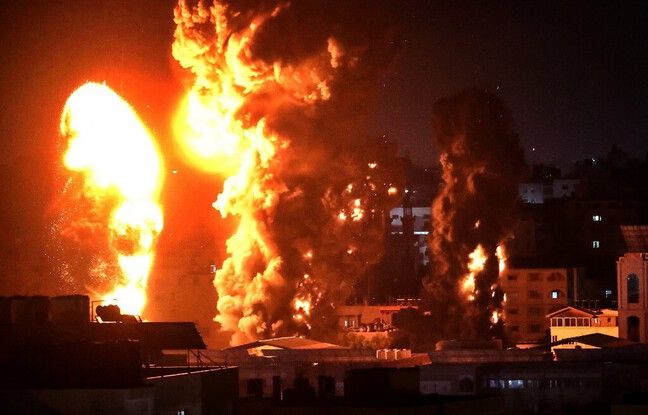 After a dark week that left some 200 dead in the violence between the Hebrew state and Islamist Hamas, deaf to international calls for de-escalation, the Israeli army carried out, in the early hours of Monday, an intense series of strikes on Gaza.

On the night of Sunday to Monday, the Israeli air force shelled the Gaza Strip dozens of times in the space of a few minutes, causing power cuts, an AFP journalist noted. Hundreds of buildings were damaged, according to local authorities, who did not immediately report any casualties.

“Netanyahu must realize that we are civilians”

In a short statement, the Israeli air force said its “fighter planes” were hitting “terrorist targets” in Gaza, without commenting. “There has never been a strike of such magnitude,” said Mad Abed Rabbo, 39, who lives in western Gaza City, expressing his “horror, fear”. “I felt like I was dying,” said another Gaza resident, Mani Qazaat. “Netanyahu must realize that we are civilians, not soldiers.”

The new Israeli strikes come as the Palestinian enclave, controlled by the Islamists of Hamas, recorded its heaviest daily death toll on Sunday since the start of this new episode of violence: 42 Palestinians, including at least eight children and two doctors, perished in raids, according to the local health ministry. In total, since May 10, 197 Palestinians have been killed, including at least 58 children, and more than 1,200 injured. On the Israeli side, 10 people were killed, including a child, and 282 injured after shooting by Palestinian armed groups from Gaza.

“Our campaign against terrorist organizations continues”

These armed groups, including Hamas, have fired more than 3,100 rockets at Israel since the start of the deadly hostilities, the highest rate of projectiles ever fired on Israeli soil, the IDF said on Sunday, stressing that a large part had been intercepted by its anti-missile system. “Our campaign against terrorist organizations continues at full speed,” Israeli Prime Minister Benjamin Netanyahu said on Sunday, justifying the strike that pulverized the 13-story tower housing the premises of the Qatari news channel Al-Jazeera and the American news agency Associated Press (AP). The Israeli army, which has said it has targeted Hamas premises and equipment, as well as certain commanders and underground tunnels, accuses the Islamist movement of establishing itself near civilians to use it as a “shield”.

On Sunday, the Israeli air force struck the homes of Hamas leader in Gaza, Yahya Sinouar, and his brother, “a terrorist militant”. Palestinian security sources have confirmed the strike but the fate of Yahya Sinouar is unknown. The last major confrontation between Israel and Hamas dates back to the summer of 2014. The 51-day conflict had ravaged the Gaza Strip and left at least 2,251 dead on the Palestinian side, mostly civilians, and 74 on the Israeli side, almost all of them. soldiers. The violence “has the potential to trigger an uncontrollable security and humanitarian crisis and further encourage extremism,” UN Secretary-General Antonio Guterres warned on Sunday at the opening of an emergency meeting of the United Nations. Security Council. “This senseless cycle of bloodshed, terror and destruction must end immediately,” he insisted, while this third virtual session did not lead to any progress.

“A spiral of violence”

The current crisis erupted on May 10 with a barrage of rockets fired by Hamas at Israel in “solidarity” with the hundreds of Palestinian protesters injured in clashes with Israeli police in East Jerusalem. At the origin of the demonstrations, the threat of forced eviction of Palestinian families for the benefit of Israeli settlers in the district of Sheikh Jarrah. Sunday evening in the same neighborhood, a car-ram attack on an Israeli patrol left several people injured. The police first said they had “neutralized” the assailant and then specified that he was “dead”.

She also said she made “a number of arrests” after nightly clashes in other areas of East Jerusalem. Hostilities spread this week to the West Bank, another Palestinian territory occupied by Israel since 1967, where clashes with the Israeli army have left 19 dead since May 10, according to a Palestinian record. On its territory, Israel is also confronted with unprecedented violence and threats of lynchings in its “mixed” towns, where Israeli Jews and Arabs live. “The clashes risk dragging Israelis and Palestinians into a spiral of violence with devastating consequences for the two communities and for the entire region,” Antonio Guterres warned on Sunday.