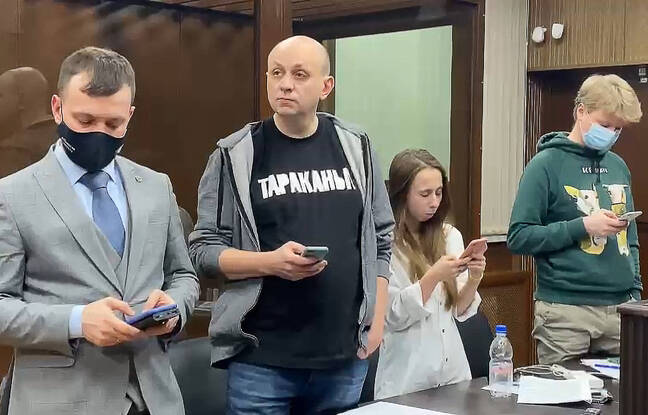 Sergei Smirnov, editor-in-chief of the independent Russian news siteMediazone, was sentenced Wednesday to 25 days in prison for “organizing mass protests”. Last month, he retweeted a joke about a protest in favor of Alexei Navalny.

The Tverskoy court in Moscow has thus found Sergei Smirnov guilty of having repeatedly violated the law on the organization of a demonstration, explained his lawyer, Fyodor Siroch.

Sergei Smirnov, 45, retweeted a joke whose author found him physically resembling the leader of the punk group Tarakany (Cockroaches) who had shown his support for a demonstration organized on January 23 across Russia at the call of the main Russian opponent Alexeï Navalny, now imprisoned. The joke was accompanied by a photo of the singer featuring the date and time of the protest that saw tens of thousands of Russians take to the streets in over 100 cities.

Sergei Smirnov was arrested in the middle of the street in Moscow on January 30, on the eve of a new demonstration in favor of Alexey Navalny, while he was walking with his five-year-old son. He was not released until several hours later, on condition that he appeared before the judge on Wednesday. “This is the first arrest of a media editor in Russian history,” Piotr Verzilov, founder of Mediazone, which provides information on the trials of human rights defenders in Russia. According to him, Sergei Smirnov did not even participate in the demonstration on January 23.

The Committee to Protect Journalists (CPJ) expressed in a statement its “concern” for the “unfounded persecution” of Sergei Smirnov and called for his “immediate release”. “Journalists in Russia must be able to work freely and without fear,” CPJ said. For its part, the NGO Reporters Without Borders (RSF) denounced “trumped up accusations”, considering that the editor’s rights to defend himself “have been violated” and describing his trial as “ubuesque”.

Many Russian editors also denounced this Thursday the imprisonment of the journalist. Daily Kommersant spoke in a forum of an “attempt to intimidate all other journalists”, calling for the immediate release of Sergei Smirnov, as at least twenty national and regional editorial staff counted by Mediazone. The RTVI television channel, for its part, judged that this arrest testifies to the “increased level of pressure against the independent media”. For its part, the independent Russian newspaper Novaïa gazeta announced its intention to publish during the next 25 days “the main articles of Mediazona” as a sign of solidarity.

Share
Facebook
Twitter
Pinterest
WhatsApp
Previous articleAmong all the information to know before buying, there is the noise of planes around
Next articleGovernment wants to extend reimbursement of EMPs from six to eight years