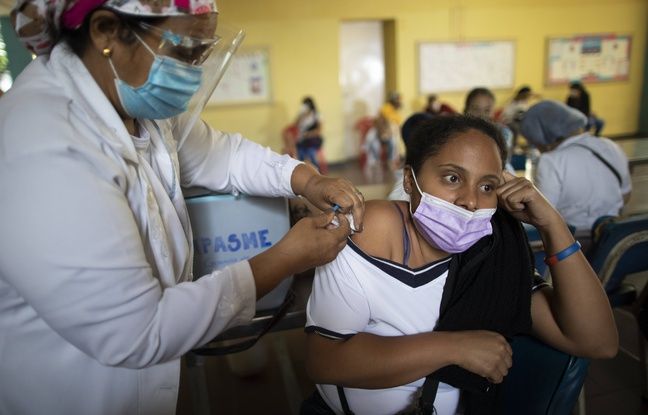 Nicolas Maduro is trying to get around the international sanctions that hit his country’s oil sector. The Venezuelan president on Sunday offered “oil for vaccines” as his country faces a second wave of coronavirus. With this barter proposal, the Head of State hopes to find outlets for his black gold that he is struggling to market.

“Venezuela has oil tankers, has customers willing to buy oil from us. He would devote part of his production to getting the vaccines he needs. Oil for vaccines! », Launched Nicolas Maduro, during an intervention on public television. ” We are ready. Oil for vaccines! But we are not going to beg them from anyone, ”he added, in a clear allusion to an initiative by the main opponent Juan Guaido who promised to release Venezuelan funds to the United States to buy vaccines.

Venezuela and its oil company PDVSA are subject to international economic sanctions, in particular from the United States, which wants to oust Maduro from power. Former oil giant, Venezuela produced 520,000 barrels / day in February 2021, according to OPEC, far from the 3 million it produced in 2013. The drop in production predates the sanctions but the country is struggling to find customers due to of these.

The phrase “oil for vaccines” echoes above all the “Oil for Food” program set up by the UN to come to the aid of the Iraqi populations despite the economic sanctions decreed after the invasion of Kuwait by Iraq in 1990.

Venezuela launched a vaccination campaign against Covid-19 in February with the Russian Sputnik V and Chinese Sinopharm vaccines and must also receive 60,000 Cuban vaccines. He had previously reserved between 1.4 and 2.4 million doses of this vaccine through the Covax device of the World Health Organization for the most deprived countries.

None of those vaccines arrived due to Venezuela’s debt problem to the WHO, and President Maduro has been trying for weeks to release frozen funds to settle the dispute. Venezuela also announced on March 15 its decision to refuse AstraZeneca, due to possible side effects, but asked to receive vaccines from another manufacturer.

The country of 30 million inhabitants has recorded 154,165 cases for 1,532 deaths according to the official report of March 25, figures questioned by the opposition while hospitals and clinics are saturated according to witnesses. The authorities are now worried about the recent increase in the number of cases and in particular the appearance of the Brazilian variant of the virus.