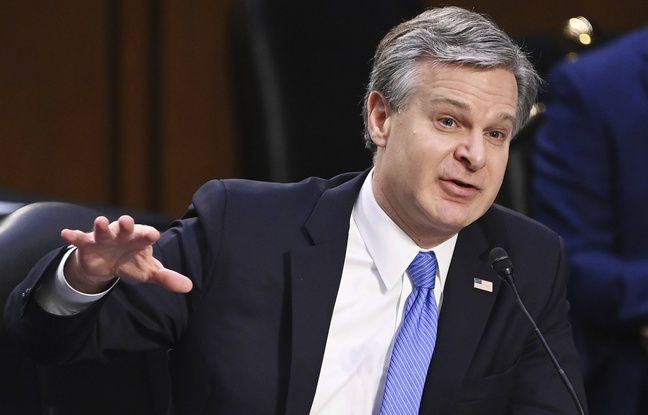 Republican senators can ask the same question in all its forms: no, there were no anti-fa or anarchist activists infiltrated among supporters of Donald Trump during the attack on Capitol Hill on January 6. Passed to the grill by elected officials of Congress on Tuesday, the boss of the FBI once again denied this theory. And assured that a note passed unnoticed on a possible risk of violence had indeed been transmitted to the competent agencies on the eve of the insurgency via “normal” channels.

The day before the attack, a report from the local FBI office in Norfolk (Virginia) had warned of calls to “fight”, underlined at the end of February the Capitol Police chief, Steven Sund, who has since resigned. . But the document, sent in the evening to the Capitol police, had not circulated internally, he assured the Senate.

Wray, on the Norfolk FBI report on possible violence on the eve of the 6th:
– it was unverified “raw” intelligence
– passed within the hour by “3 channels” to partners (Capitole police and DC) by email, in person + on a portal
– he saw it a few days later pic.twitter.com/GByp1pPk7I

Questioned by the Senate Judiciary Committee, Christopher Wray on the contrary affirmed that this “situation report”, which gathered “raw, unverified and uncorroborated elements, which had been posted online”, was “quickly” transmitted “To our partners, including the Capitol Police, and the Washington Police.”

In addition, it was transmitted in three different ways: by electronic message, orally to local anti-terrorist services, and via a national portal internal to the police.

This approach is “consistent with our normal procedure”, assured the director of the FBI.

The information, even unverified, was “worrying and specific” enough to be reported, he said. Norfolk officers made “reasonable judgment” to release their information, “even though they did not know if it was going to happen.”

The federal police chief also brushed aside allegations that the attackers on Capitol Hill were antifa activists disguised as supporters of Donald Trump. “So far we have no material on violent anarchist extremists or people associated with anti-fascists in connection with January 6,” he said. According to him, the attackers were mostly “violent extremists members of militias” and also included “violent extremists motivated by racism and who support white supremacism”.

About 10,000 supporters of the former president had gathered on January 6 on the outskirts of Congress, where elected officials certified the victory of Joe Biden. Faced with too few police forces, around 800 demonstrators, according to the authorities, had succeeded in breaking into the Capitol, causing chaos and controversy over the lack of anticipation of the security forces.

According to Wray, 270 people have so far been charged, most of them with “violent intrusion”, but several members of the Oathkeepers militia are accused of “conspiracy” in an organized gang. Christopher Wray warned: “The problem of domestic terrorism has metastasized for several years, and it is not going to go away. “