“No sign” of contagion during a test concert of 5,000 people in Barcelona 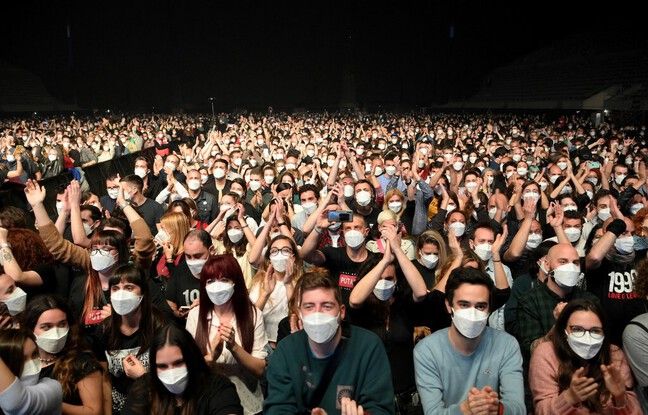 A month after a rock test concert, on March 27 in Barcelona (Spain), with 5,000 masked dancing spectators but without distance, there was “no sign” of contagion to the coronavirus, the organizers said on Tuesday .

Two weeks after this concert by the Love of Lesbian group, according to data provided by the public health system, “there is no sign that any transmission took place during the event, which was the goal. of this study, ”said Josep Maria Llibre, doctor at the Germans Trias i Pujol hospital in Badalone, during a press conference.

“We can guarantee a safe space”

The audience, who had been tested for antigen before the concert, wore FFP2 masks. According to the doctor, only six positive cases were notified among the 5,000 spectators, fifteen days after the concert and the organizers are certain “that for four of these six cases, the transmission did not take place during the concert”. “With optimized ventilation, antigen testing and wearing a mask, we can guarantee a safe space,” he added.

In addition to the FFP2 tests and masks, ventilation as well as reception capacities in critical places such as toilets were strictly controlled. Organized by a group of festivals, musical promoters and the Germans Trias i Pujol hospital who wanted to show that concerts are possible despite the pandemic, this experience is one of the few to have taken place in Europe in current music.

Another test concert took place in early March in the Netherlands with 1,300 people. “Once again, Barcelona and Barcelona culture are pioneers in an unprecedented situation where cultural activity must be preserved with all health guarantees”, rejoiced Jaume Collboni, First Deputy Mayor of Barcelona during this conference of hurry.

“It is possible to relax the restrictions and combine this with cultural activities that must resume,” he said. “The world had their eyes riveted on us, many people asked us how we had done”, for his part explained Angels Ponsa, in charge of culture within the Catalan regional government. Already in December, the same team of researchers had organized a pilot project in a hall in Barcelona with 500 spectators previously tested. A few days later, none had contracted the virus.