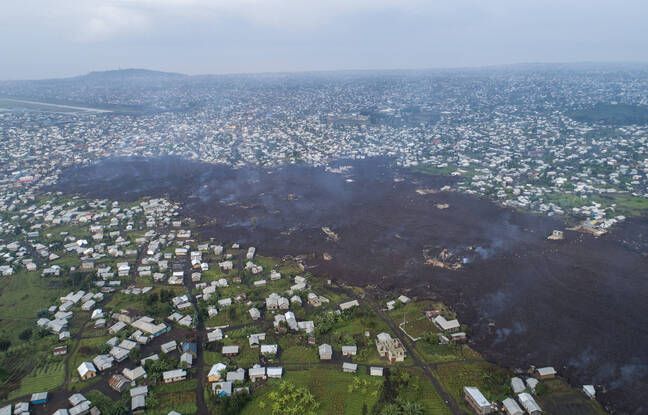 Between 900 and 2,500 homes were destroyed by lava flows during the eruption of the Nyiragongo volcano on Saturday, in the east of the Democratic Republic of Congo (DRC), Raphaël Ténaud, deputy chief of delegation of the International Committee of the Red Cross (ICRC) in Goma.

The sudden eruption on Saturday evening of the Nyiragongo volcano, which dominates Goma and Lake Kivu, sowed terror and caused the population to flee. Two lava flows escaped, one of which reached the edge of Goma, where it came to rest on Sunday morning.

Many homes were swallowed up by this lava spout extending for hundreds of meters, which also cut for a kilometer the road connecting Goma to Butembo, the main one in North Kivu and an important axis of regional trade.

The human toll continues to grow. On Monday evening, the provincial coordinator of Civil Protection in North Kivu, Joseph Makundi, reported 32 dead, at least seven people having died Monday, suffocated by toxic fumes, as they walked on the lava flow.

Tuesday, the situation was very tense in the city, shaken by strong earthquakes, and where the population lives in the anguish of a new eruption. At least two long cracks appeared, a few tens of centimeters wide in places. They fractured the ground in the middle of the city. One has split the ground in the western part of the city and stretches for several hundred meters, between Mount Goma, which marks the northern limit of the city, to the general hospital and the shores of the lake. Kivu. The other, nearly a hundred meters long, appeared at the end of the morning near Goma airport, in the northeast of the city, on the roadway of the main road leaving Goma for Butembo, towards the north. of the province, we found.