On the Médoc coast, “it is becoming difficult to find a rental for the months of July and August” 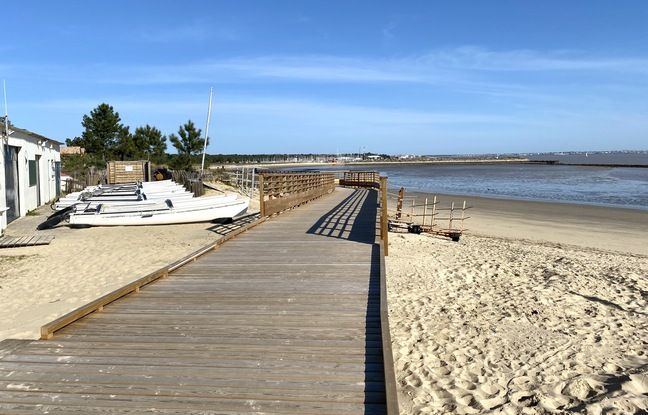 In recent days with the good weather, “we worked like in the middle of summer” in Lacanau, a seaside resort on the Medoc coast, assures the mayor of the city Laurent Peyrondet. And the Médoc Atlantique tourist office will reopen its eight information offices this weekend, as if nothing had happened. Or almost.

“We are preparing as if it were a normal season, even if we know that the start of the season may be complicated,” says Laurent Peyrondet. Very popular last summer, just like during the last February holidays, the destination of the Medoc coast which goes from Lacanau to the tip of Verdon-sur-Mer, should attract more people this summer.

“Reservations are already very important, assures the mayor of Lacanau, and it is becoming difficult to find a rental on the coast of Médoc Atlantique for July and August. We know we will have people. “” We are an outdoor destination, and it is towards this type of destination that the French are going to turn this year, it is undeniable, confirms Nicolas Jabaudon, director of the Médoc Atlantique tourist office. We are not alone, there are many places that play on this aspect, such as Creuse or Larzac. But we have the ocean, which remains a safe bet. “

However, many uncertainties still hang over the evolution of the restriction measures according to the epidemic progression, or even on the reopening protocols. In this, tourism professionals await clarifications from the Head of State, who is speaking this Wednesday evening.

“As a tourism professional, I expect a communication with deadlines according to scenarios, implores Nicolas Jabaudon. I am aware that we are all in a complicated situation, I have no magic formula, but we have to know what is planned according to this or that evolution of the epidemic. This is essential if only for seasonal staff, because there is a lot of difficulty in recruiting. The Medoc coast employs around 6,000 seasonal workers every year.

This difficulty in recruiting is one of the reasons why some structures postpone their reopening date. “Certain complex sites like the UCPA need visibility,” confirms Laurent Peyrondet. “The outdoor hospitality sector is now looking towards the date of May 21,” announces Nicolas Jabaudon, who also wonders about “the legal vagueness” concerning “establishments with aqualudic-type structures that have no no authorization to reopen today, or paintball-type activities which make requests to the prefecture and are answered in the negative … “

These activities will be very popular this summer. Just like cycling. “It’s amazing, it’s a practice that is growing exponentially,” notes Nicolas Jabaudon. The rental companies are robbed every weekend. Fortunately, we are lucky to have 250 km of cycle paths throughout the country. And there is also surfing, which was already very popular, but right now the surf schools that have reopened are full. “

“Not too many illusions for the Easter holidays …”

However, the complete success of the tourist season will only be possible under certain conditions. “It will be partly based on lifting the curfew, because going on vacation when you know you have to be at 7 pm in your accommodation, it still limits. And there will be the issue of reopening restaurants, of course. I can tell you that it would be good for them to reopen on June 15, but it is impossible to plan, because today we have the feeling that everything is going towards the reinforcement of the restrictions ”, worries Nicolas Jabaudon.

Laurent Peyrondet, for his part, is more optimistic, “even if the incidence rates are starting to become worrying in Gironde”. “I think that on April 15 we will have vaccinated a good part of the over 75s and the most fragile people, and that the curve will start to reverse,” anticipates the elected official. But, in the meantime, he recognizes that “we do not have too many illusions about the Easter holidays …”