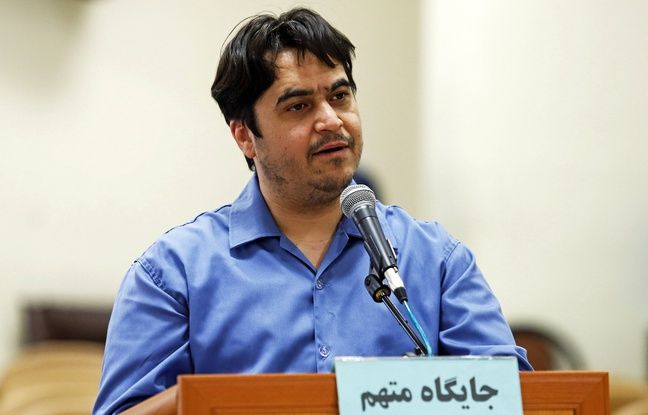 Iranian opponent Rouhollah Zam, a time exiled in France, was executed Saturday morning in Iran, quickly after the confirmation of his death sentence for his role in the wave of protest in the winter of 2017-2018. The “counterrevolutionary” Zam was hanged, state television reported, recalling that the Supreme Court had upheld his death sentence because of the “gravity [de ses] crimes ”against the Islamic Republic.

The spokesperson for the Judicial Authority, Gholamhossein Esmaïli, indicated on Tuesday that this institution had ruled “more than a month ago” on Zam’s case and confirmed “the verdict [rendu en juin par le] revolutionary tribunal ”in Tehran. The European Union condemned “in the strongest terms” the execution of the Iranian opponent, recalling its opposition to the death penalty “whatever the circumstances”. For its part, France condemned “with the greatest firmness this serious attack on freedom of expression and freedom of the press in Iran. It is a barbaric and unacceptable act, contrary to the international commitments of this country. “

Diana Eltahawy, deputy director for North Africa and the Middle East at Amnesty International, said she was “shocked and horrified” by the execution. Calling Zam a “journalist and dissident”, Amnesty had judged that the confirmation of his sentence marked “a shocking escalation in Iran’s use of the death penalty as a weapon of repression”. The NGO also asked the European Union to intervene quickly with the Iranian Supreme Leader, Ayatollah Ali Khamenei, “so that he overturns this cruel verdict”.

Reporters Without Borders, who accused Iran of kidnapping Zam while he was in Iraq to try him at home, said on Saturday that she was “shocked that [les autorités iraniennes] have carried out their sentence ”. Zam had lived in exile for several years in France before being arrested by the Revolutionary Guards, the ideological army of the Islamic Republic, in obscure circumstances.

#Iran #Rohollah_Zam director of the AmadNews site was executed on 12/12. RSF shocked that Iranian justice and the sponsor of this act @superheroes have executed their sentence. RSF had warned @mbachelet & @JavaidRehman the imminent execution from 23/10 pic.twitter.com/Bj2UNi8W46

His arrest had been announced in October 2019, but Iran did not specify the place or the date of the facts, accusing the 40-year-old opponent of being “led by French intelligence and supported” by the secret services of the States. United and Israel. Zam, who had refugee status in France, ran a channel (Amadnews) on the encrypted messaging platform Telegram, and was found guilty of playing an active role in the winter 2017-2018 protest.

The trial opened in February

At least 25 people were killed in these disturbances which affected several dozen Iranian cities between December 28, 2017 and January 3, 2018. Tehran had qualified as “sedition” this movement of protest against the high cost of living which quickly took a political turn. At the request of the Iranian authorities, Telegram had agreed to shut down Amadnews – which had nearly 1.4 million subscribers – accusing this channel of having incited “violence”.

Zam’s trial had opened in February. According to the indictment, the opponent had appeared for “corruption on the ground”, one of the most serious charges in Iran, punishable by death. He was also prosecuted for “crimes against the country’s internal and external security,” “espionage for the benefit of the French intelligence service,” and insults the “sacredness of Islam.” The Judicial Authority said in June that he had been convicted of all the charges against him.