Opponent Sonko calls for “much greater” but “peaceful” mobilization 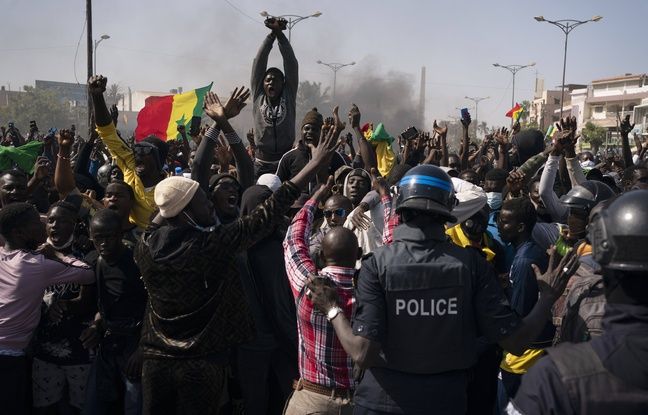 The main Senegalese opponent, Ousmane Sonko on Monday asked the Senegalese to strengthen their “mobilization”. His arrest on March 3 has already caused the worst unrest for a decade in his country.

“The revolution has already started, nothing and no one will be able to stop it,” the deputy told the press. “We must keep this mobilization, it must be much more important even, but above all it must be peaceful,” added Ousmane Sonko, a few hours after being indicted in a case of alleged rape and released. under judicial supervision, after five days in police custody. He also set himself the prospect of the 2024 presidential election, which he asked Macky Sall to give up without ambiguity.

For his part, Senegalese President Macky Sall called Monday for “calm and serenity”, during his first public intervention since the arrest of his main opponent.

The Senegalese head of state also announced a “reduction” of the curfew in force in Dakar and Thiès (West), the two regions which concentrate the vast majority of Covid-19 cases. The latter is “now fixed from midnight to five in the morning”, against from 9 p.m. to 5 a.m. since January.

At least five dead in the protests

Macky Sall himself appeared at 8 p.m. (GMT and local) on public television for a solemn declaration entirely devoted to the events of the past few days, which officially left at least five dead, and at least ten according to Ousmane Sonko. Filmed in his office, next to the Senegalese flag, Macky Sall, elected in 2012 and re-elected in 2019, did not mention the name of his opponent once.

He promised that the State “will come to the aid of bereaved families and facilitate access to care for the wounded” and praised the “restraint” of the defense and security forces, otherwise the toll would have been “much heavier,” according to him. “.

Ousmane Sonko accuses him of having instrumentalized justice

“On the judicial aspect of this crisis, let justice take its course in complete independence,” said Macky Sall, while Ousmane Sonko accuses him of having used justice to remove him from the next presidential election. “All together, let us silence our resentment and avoid the logic of the confrontation which leads to the worst,” Macky Sall also said, saying he was ready for dialogue.

The president, who many protesters accuse of ruling in favor of a small elite, said he was measuring the “daily difficulties” of Senegalese, exacerbated by the pandemic. He also acknowledged that efforts to employ young people “are still insufficient” and promised to release new funds for them. But he also taught them a lesson: “When you loot a business, you don’t create jobs, you don’t reduce poverty, you make it worse,” he said.