Outgoing president Ismaël Omar Guelleh reelected with 98.58% of the vote 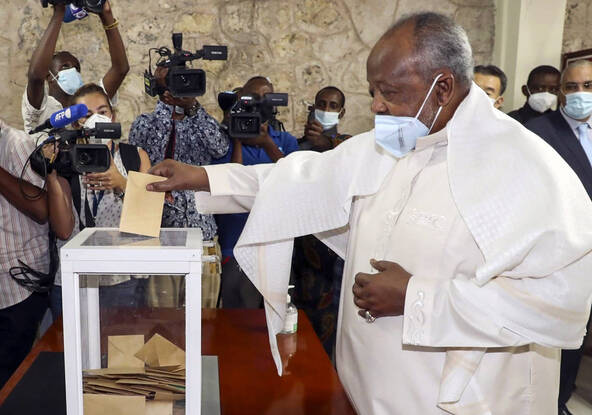 There was no suspense. Ismaël Omar Guelleh was re-elected Friday with 98.58% of the vote, according to provisional official figures, as president of Djibouti, a small strategic country in the Horn of Africa which he has led with an iron fist for 22 years.

“IOG”, 73, was running for a fifth and, theoretically, last term against Zakaria Ismail Farah, a 56-year-old businessman who had recently entered politics and whose chances of victory seemed slim. “President Ismaël Omar Guelleh obtains 167,535 votes, or 98.58% (…) These are the provisional results of the presidential election on April 9, 2021”, announced around 3:15 am on the night of Friday to Saturday Moumin Ahmed Cheick, the minister of the Interior, on public television RTD. He added that Farah got less than 5,000 votes. The final results will soon be “given by the Constitutional Council”. In 2016, during the previous presidential election, Guelleh was credited with around 87% of the vote, again in the first round. The some 215,000 registered voters (out of a total population of 990,000 people) were invited to go to one of the country’s 529 polling stations, mostly located in the capital Djibouti-ville.

The second president since independence from France

This re-election is nevertheless taking shape as a last lap for IOG, which will have, in the next election in 2026, exceeded the age limit of 75 years imposed by the Constitution. This limit was introduced in 2010, during a revision of the Constitution mainly intended to remove the limit of two terms fixed until then.

This reform enabled Guelleh, the second president of Djibouti since independence from France in 1977, to run for a third term the following year. He then promised, in 2011, that this would be his last candidacy. The first four terms of Guelleh were marked by an exercise of authoritarian power leaving little room for protest and freedom of the press, but also by a development of the economy, based on the development of ports and structures. logistics.

This desert territory, located opposite one of the busiest sea routes in the world, on the borders of Africa and Arabia, has become a commercial crossroads. It also hosts important foreign military bases (United States, France, China, Japan).

Share
Facebook
Twitter
Pinterest
WhatsApp
Previous articleThe defense scores its first points thanks to the nuanced testimony of the medical examiner
Next articleSnow, perfect conditions but no ski lifts … Ski resorts frustrated by their winter