Over 1,000 people demonstrate in support of Palestine in Washington 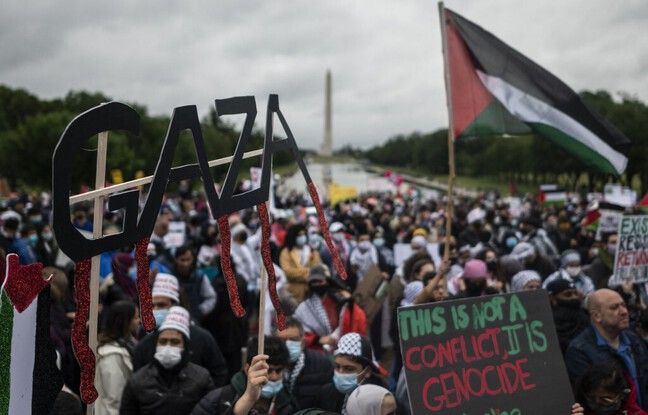 More than a thousand people demonstrated in Washington on Saturday in defense of the Palestinians, demanding in particular the end of aid from the American state for the benefit of Israel. Gathered on the steps of the Lincoln Memorial, an iconic place of protest in the American capital, the participants chanted their desire to see a “free Palestine”, and demanded the end of what they consider to be an “apartheid” of the part of Israel to the Palestinian people.

“We hope to send a clear message to the United States government that the days of supporting the Israeli state without repercussions are over,” said Sharif Silmi, present at the protest, amid hundreds of Palestinian flags flying in the street. crowd, significantly larger than at previous pro-Palestinian rallies. “We will face any politician who continues to fund arms for Israel. We will oppose them, we will vote against them, and we will finance their opponents, until we beat them at the polls, ”added the 39-year-old Washington-based lawyer.

“There is a generational shift”

“People have woken up and they are resisting. Whether it is young Jews, young Muslims, young black people, young white people, there is a generational shift, “in the United States in the struggle for” change and liberation of the Palestinian people and all oppressed peoples ”, according to him. A sentiment echoed by Lama Alahmad, who came with friends from the neighboring state of Virginia, according to whom there is a “huge change” underway in the United States in favor of the Palestinian cause. “We just want the world to see us as human beings. We are not terrorists, ”argued the 43-year-old housewife.

Originally from the Palestinian Territories, having grown up in the United Arab Emirates before arriving in the United States “a little more than twenty years ago”, Lama Alahmad added to wish “simply that we give their rights (to the Palestinians), so that people like (her) can come back, and (her) children can visit there ”. From May 10 until the May 21 ceasefire, 253 Palestinians were killed by Israeli strikes in the Gaza Strip, including 66 children and fighters, according to local authorities. In Israel, rocket fire from Gaza killed 12 people, including a child, a teenage girl and a soldier, according to police.