Polar cold envelops the country, millions of people without electricity 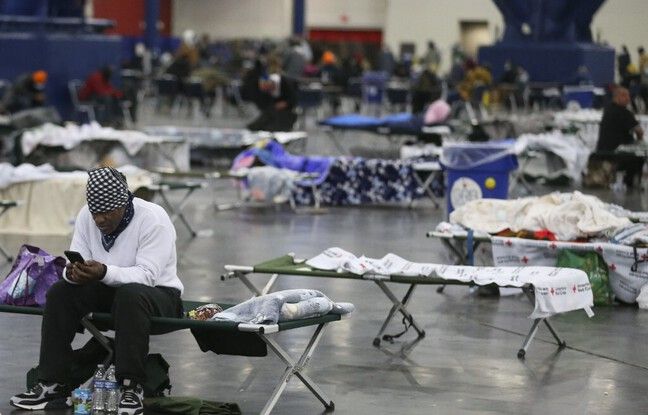 Temperatures between 11 and 19.5 ° C below seasonal norms. A wave of polar cold swept over part of the United States on Wednesday, depriving millions of Americans of electricity.

The weather service, the National Weather Service (NWS), said Wednesday that more than 100 million Americans in the Midwest were affected by warnings of winter storms of varying severity.

The vaccination campaign in slow motion

According to the NWS, the mass of cold air coming from the Arctic is starting to clear, but freezing temperatures should be maintained and “remain between 11 and 19.5 ° C below seasonal norms” in the central part of the United States , write meteorologists. Jeff Zients, the White House’s Covid-19 coordinator, said the cold was affecting the vaccination campaign, forcing sites to close. President Joe Biden, for his part, had to postpone a visit, scheduled for Thursday, to a Pfizer plant producing vaccines in Kalamazoo, Michigan, to Friday.

More than 30 deaths linked to bad winter weather have been recorded across the country according to US media, and authorities have urged Americans to be careful. The distress was particularly visible Wednesday at Lakewood Church, in the state’s largest city, Houston, where many residents took refuge to escape the cold. The bad weather and the cold did not spare the animals. The Primarily Primates protection organization, based near San Antonio and without power since Monday, reported the deaths of 12 monkeys on Wednesday despite efforts by caregivers to try to keep the primates warm.

Beto O’Rourke, former Texas candidate for the Democratic primary for the 2020 presidential election, judged on MSNBC that “it would have been possible to guard against most” of these difficulties, asserting: “Texas is not not far from being a failed state. The electricity supplier in Austin, the state capital, said nearly 200,000 homes were without power and that the blackouts would last all day Wednesday “and potentially longer.” The energy companies have chained the partial cuts since this weekend, in order to avoid the overheating of the whole system due to peaks in demand.

According to the Poweroutage.us site, which lists power outages in the United States, more than 2.3 million homes and businesses in Texas were without power Wednesday night. The power shortage was compounded by the shutdown of several gas-fired power stations and wind turbines due to freezing conditions. Up to 73% of the United States, excluding Hawaii, Alaska and other non-mainland territories, were covered in snow overnight from Tuesday to Wednesday, according to the NWS. A record since the start of these measures in 2003.

And Texas, used to mild temperatures even in winter, is no exception: a 15cm thick white coat has covered the capital Austin, a record for more than 70 years, and more snowflakes could befall in this state the next few days, warned the Weather Service. This “spectacular cold snap that hit the continental United States is linked to the combination of an arctic high carrying freezing temperatures and a very active depression with waves of precipitation,” the NWS explained on Monday.

Outside of Texas, residents were also deprived of electricity across Oregon (northwest), Louisiana (south), Mississippi (south), Kentucky (central-east), Ohio (north -est), West Virginia (east), and Virginia (east), according to poweroutage.us. The extreme conditions also caused the formation of several tornadoes, one of which hit the night of Monday to Tuesday in the southeastern United States, in North Carolina, killing three people and leaving ten injured.