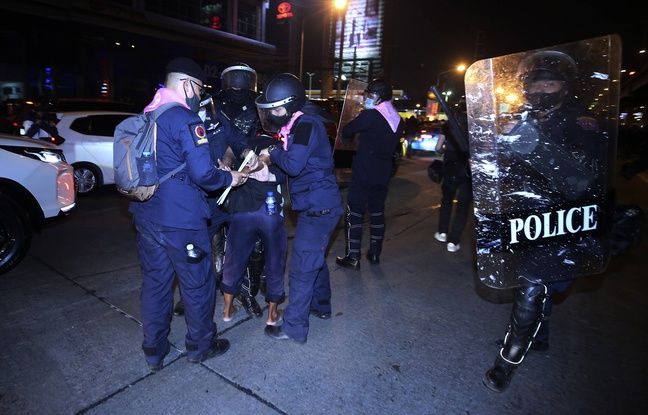 The Thai regime has once again issued a clear warning to those who oppose its power. In Bangkok, police used rubber bullets, water cannons and tear gas on Sunday against pro-democracy protesters gathered outside the Prime Minister’s residence.

Around 2,000 demonstrators, according to estimates, marched to a former barracks where the Prime Minister, former army chief Prayut Chan-O-Cha lives, whose pro-democracy movement born in 2020 is calling for his resignation. Clashes erupted between demonstrators and riot police deployed in front of the entrance to the barracks, protected by barbed wire and containers.

To disperse the crowd, the police therefore used force against the demonstrators for the first time in several months. In front of them, some demonstrators raised their hands in the air, others had three fingers raised in resistance. Protesters also threw glass bottles, stones and bricks at the police as others retreated to a nearby gas station. Some 16 protesters were injured, according to a doctor at the Erawan emergency center.

Despite the organizers’ calls for dispersal around 8:30 p.m. (2:30 p.m. in France), many demonstrators remained on site, some on motorcycles playing cat and mouse with the police. At least two people were arrested, according to images broadcast live on Facebook, but police did not give a figure. The Thai Lawyers for Human Rights collective puts forward the figure of 19 people arrested, one of whom is 16 years old.

The protest movement calling for the resignation of the government, which had gathered tens of thousands of demonstrators, mostly young people, between July and December 2020, has lost in intensity due to the Covid-19 pandemic. But the recent arrest of four leaders of the movement has re-mobilized the demonstrators. A total of 58 protesters have been charged with lèse majesté, a crime normally punishable by up to 15 years in prison, since the start of the movement, which also calls for reform of the wealthy Thai monarchy.