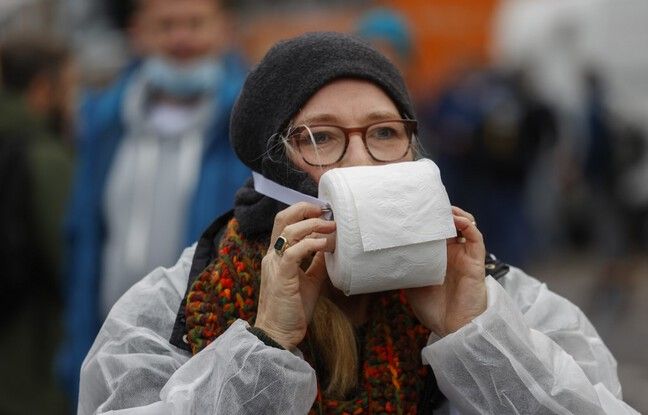 In Berlin, “anti-masks” were dispersed by German police, who used water cannons on Wednesday. Demonstrators were protesting against restrictive measures imposed by the government in the face of the coronavirus pandemic.

Shortly before, the police had ordered the dissolution of this gathering of 5,000 to 10,000 people near the Brandenburg Gate, in the heart of the capital, after having repeatedly ordered them over loudspeakers to respect the health instructions. ” Shame ! Shame, ”chanted participants, refusing to leave the avenue du 17-Juin, the long artery that starts from the Brandenburg Gate and where they had started to meet in the morning.

These protesters, who respond to the call of a motley collective called “the free-thinkers”, accuse the government of Angela Merkel of wanting to establish a “dictatorship” while since early November, Germany has tightened restrictions for attempt to stem the second wave of contaminations.

This gathering also comes at a time when the two chambers of parliament (Bundestag and Bundesrat) must adopt during the day a reform which includes in national law a battery of measures to fight against the spread of the virus, such as respect for social distancing or the wearing a mask. In online discussion groups, some of the opponents did not hesitate to compare this reform to the law on full powers granted to Adolf Hitler in 1933, barely two months after his accession to the chancellery.

These comparisons have aroused the ire of some political leaders, notably Vice-Chancellor Olaf Scholz and Foreign Minister Heiko Maas. In the demonstration, some held up signs in the form of a photomontage showing Angela Merkel in convict attire, crossed out with the word “guilty”. The German authorities had banned the holding of this demonstration in front of the Reichstag, the building that houses the Chamber of Deputies (Bundestag) for fear of violent outbursts.

On November 7 in Leipzig, in the former GDR, a similar demonstration, bringing together more than 20,000 people, had degenerated into violence and sparked a lively debate on the advisability of authorizing such gatherings in the midst of the fight against the coronavirus. Another parade, in Frankfurt this Saturday, also resulted in clashes.