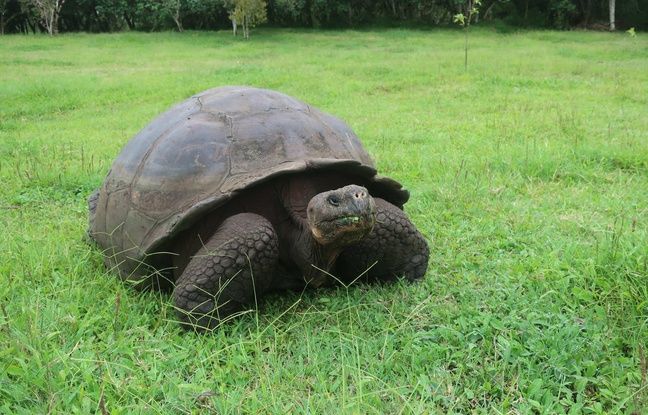 An Ecuadorian police officer has been arrested for the alleged trafficking of 185 babies of a species of giant tortoise from the Galapagos archipelago, discovered in a suitcase bound for the mainland, the prosecution announced on Monday. “The policeman Nixon Alejandro PD will be prosecuted for his alleged responsibility in the abortive expedition of 185 turtles to Guayaquil”, on the Ecuadorian Pacific coast (southwest), according to the same source.

The prosecution said on Twitter that the police officer “will be charged with crimes against flora and fauna, punishable by three years in prison”. The authorities reported on Sunday the discovery of the suitcase containing these 185 baby turtles during a cargo inspection at Baltra airport, one of the islands of this Ecuadorian archipelago located 1,000 km from the coast. The turtles were individually wrapped in plastic and ten of them were already dead.

“Not in good health”

On Monday, the Ministry of the Environment said that “five more turtles had died, probably due to stress from the separation of their habitat.” The prosecution tasked the Galapagos National Park (PNG) with monitoring the surviving specimens, which were transferred to the captive turtle breeding center on Santa Cruz Island, near Baltra. “The veterinary examination concluded that the small turtles are not in good health,” the ministry added.

A scientist, expert in chelonians, clarified that “for the moment, it is not possible to determine to which species belong these turtles. It is impossible to identify them firsthand, even adults. “The only way to precisely determine a species is through genetic analyzes,” he added.

Their age “does not exceed three months”

The operator of the Baltra airport said for its part this Sunday that “the age of the turtles does not exceed three months” and that they are therefore too young for the shape of their shell to be able to determine what island they come from.

The Galapagos archipelago, which takes its name from the giant tortoises that have inhabited it for three or four million years, is classified as a natural heritage of mankind for its unique flora and fauna. It served as a laboratory for the English naturalist Charles Darwin for his theory on the evolution of species. It seems that by the time of their arrival, the ocean currents of the Pacific dispersed the turtles on the various islands, where they adapted to their environment, evolving to form 15 species, of which three are extinct.