Police shoot at protesters, two dead and around 30 injured 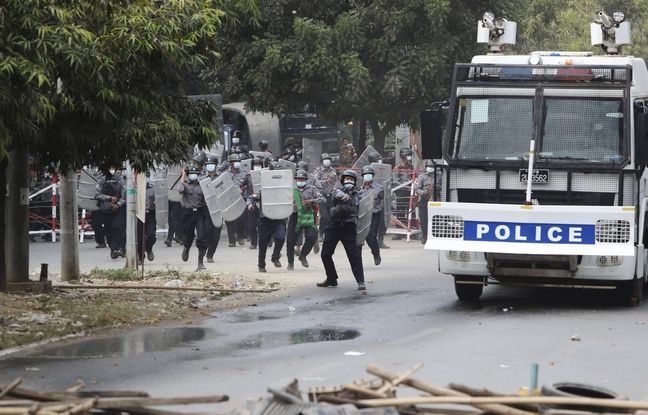 Two demonstrators were killed and around thirty injured this Saturday in Mandalay, in central Burma, by gunfire from the police during an anti-junta rally, the most severe violence since the coup February 1.

Several hundred police were deployed in the afternoon to a shipyard in the country’s second city, raising fears of arrests of employees mobilized against the coup. Protesters banged on pots in an attempt to prevent arrests, some throwing projectiles at the police who then fired.

“Half of the victims targeted by live ammunition”

“Two people died, including a minor who was shot in the head,” said Hlaing Min Oo, head of a volunteer rescue team. In a video posted to Facebook, the young man appears lying on the ground, bleeding from his head as a passer-by places a hand on his chest to assess whether his heart is still beating.

According to the emergency services, “half of the victims were targeted by live ammunition,” the others were injured by rubber ammunition and slingshot fire. The live ammunition was also confirmed by medics working in the field, on condition of anonymity for fear of reprisals.

In a video posted live on Facebook by a witness, gunshots ring out regularly. More than a dozen people were arrested, according to local media. “They hit and shot my husband and others,” a resident told AFP. “He was just watching, but the soldiers took him away.” When asked, the police were not available for comment.

The Burmese crisis remains at the heart of the international agenda. European Union foreign ministers will meet on Monday to discuss possible measures against the military. The head of European diplomacy, Josep Borrell, has already condemned the violence exercised by the police in Burma and indicated that the EU will “take the appropriate decisions”.

For its part, the NGO Burma Campaign UK has estimated that “it is unlikely that Burma’s military leaders have assets to freeze in the European Union, and a visa ban amounts to nothing more than a holiday ban ”.

To date, the United States, which has condemned “all violence against the people of Burma”, has only announced targeted sanctions against certain generals. Beijing and Moscow, traditional allies of the Burmese army at the United Nations, see the crisis as “an internal affair” in the country.