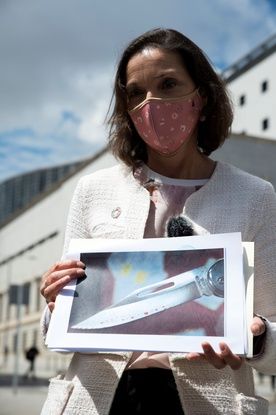 In Spain, the campaign for the regional elections of May 4 is marked by strange and threatening anonymous letters. A letter containing bullets and sent to the right-wing president of the Madrid region, Isabel Diaz Ayuso, big favorite in the poll, was intercepted by the postal service, the Spanish government announced on Tuesday. It is certainly not a first. In recent days, similar threats have been addressed to political leaders of the left.

“The security systems of the Post Office of the distribution center of Sant Cugat (Catalonia, north-east) detected a letter addressed to the president of the region of Madrid and which would contain two projectiles”, indicated the government. The post office also detected in Vallecas, district in the south of Madrid, another “letter intended for the general direction of the Civil Guard and which would contain four projectiles”, supplemented the government. “Neither tolerant nor complicit in violence and the spread of hatred. We Democrats will not tolerate it. Our strongest condemnation and our greatest repulsion towards these acts ”, for his part tweeted Pedro Sanchez, the Socialist Prime Minister.

At the end of last week, the Minister of the Interior Fernando Grande-Marlaska, the leader of the Podemos party (radical left) Pablo Iglesias and the head of the Civil Guard (gendarmerie) Maria Gamez had received letters containing death threats and bullets from an assault rifle used by the Spanish army between the 1960s and 1980s. Isabel Ayuso then denounced the political use that, according to her, the left made of these threats and spoke of “circus”. The Minister of Tourism in Pedro Sanchez’s government, Reyes Maroto, also received an envelope on Monday containing a “bloody knife”, but according to all Spanish media, a person suffering from a mental illness has been identified as being the ‘sender.

These threat letters electrified the regional campaign where the left, lagging behind in the polls, placed the fight against the far right at the heart of the ballot. Pablo Iglesias left a radio debate on Friday when far-right Vox party candidate Rocio Monasterio questioned the authenticity of the threats. On Tuesday, the Socialists called for a “cordon sanitaire” to be formed to prevent Vox from entering government in the region when, according to polls, Isabel Diaz Ayuso may need the support of the ultra-right to govern.