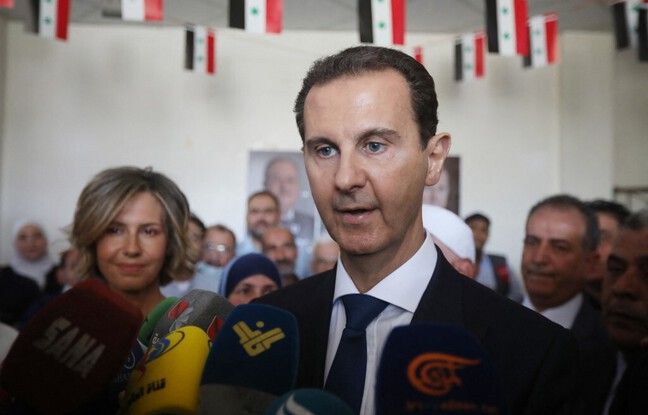 Syria is holding a presidential election this Wednesday which must offer President Bashar al-Assad a fourth term, a ballot without suspense in a country ravaged by a deadly war and mired in an economic crisis. Polling stations opened at 7 a.m. local time in the part of the country controlled by the regime, which is two-thirds of Syria. They will close at 7:00 p.m., unless there is an extension. And the results can be announced within 48 hours. “Staged”, election “neither free nor fair”: Westerners have already rejected the ballot, the second of its kind since the start in 2011 of a war involving a multitude of belligerents and foreign powers. The conflict has left more than 388,000 dead and forced millions of Syrians into exile.

National television showed long lines forming in different parts of the country. For his new seven-year term, in a country with a tattered economy and crumbling infrastructure, Bashar al-Assad presents himself as the man of reconstruction, after having chained military battles with the support of Russia and Iran, its steadfast allies. For several weeks, the portraits of the 55-year-old president have been visible in all places, especially in Damascus.

Faced with Bashar al-Assad, two candidates unknown to the general public are considered stooges: the former minister and parliamentarian Abdallah Salloum Abdallah and a member of the opposition tolerated by the government, Mahmoud Mareï. The electoral law requires candidates to have lived in Syria ten consecutive years before the election, which de facto excludes the opposition figures in exile, who are very weak. Their main coalition denounced a “masquerade”.

Propelled to power in 2000, Bashar al-Assad replaced his father Hafez, who died after thirty years of unchallenged rule. For the outgoing president, there is no need for a campaign rally or interviews with the media. Before the ballot, however, the head of state decreed an amnesty for thousands of prisoners.

More than 12,000 polling stations have been set up in government areas, according to the Interior Ministry. And, according to records, the country officially has just over 18 million voters. But with the war that has divided the country and millions of refugees abroad, the number of voters will actually be lower. In a nation polarized by war, the Kurdish autonomous regions of the northeast will ignore the ballot. Just like the last great jihadist and rebel stronghold of Idleb (northwest), which is home to some three million inhabitants.

In 2014, Bashar al-Assad obtained more than 88% of the vote according to the official results. The participation rate exceeded 73%. This presidential election was the first election involving several candidates. Previously, Bashar al-Assad and his father Hafez were nominated by referendums, where the yes often won with more than 97% of the vote.