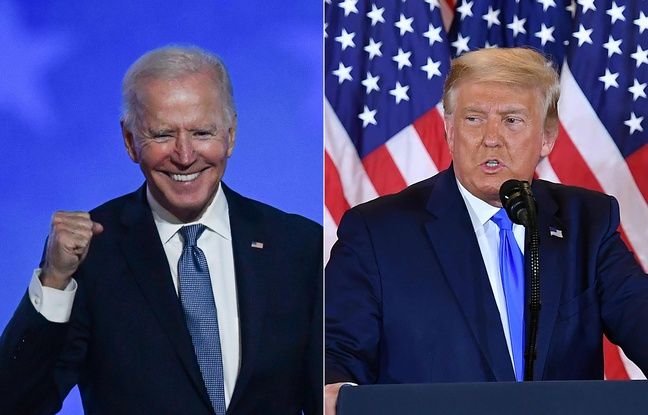 And the winner is… Well we don’t know! In the aftermath of the closing of polling stations in the United States, Americans still do not know who their new president is. Donald Trump made Trump by claiming victory prematurely. But millions of ballots, especially those that have been mailed in recent weeks, have yet to be counted. However, these advance votes would be rather favorable to Joe Biden.

Enough to push the current tenant of the White House to demand that the counting of these votes be stopped, and to consider seizing the Supreme Court to rule on the legitimacy of these votes. In short, a hell of a mess that could last several days before we know for sure who the new American president is. “This is unheard of in recent United States history,” indicates Marie-Christine Bonzom, a political scientist specializing in the country, and who has covered several American elections as a journalist. And the two candidates are ready to embark on a long legal battle if necessary to win it ”.

We are the day after the election, why is the name of the next president still not known? What are the particular difficulties of this ballot?

The American electoral system poses many difficulties, as we had already seen in 2000 during the ballot between George W. Bush and Al Gore, where the counting of votes in the State of Florida had posed many problems. Today, we relive this scenario to the power of 6, compared to the number of undecided states whose final result is still unknown. So it’s an even more complex situation than in 2000, we are in unknown territory!

The difficulties of this ballot are due to the fact that it is a federal state. It is therefore at the level of the federated states that the election is organized, with 51 local elections: in the 50 states of the country and in Washington DC. And in each of these jurisdictions, it is the local authorities, either Democrats or Republican, who decide the rules of the game, which complicates matters enormously. To cite the example of two states that are at stake and still undecided as we speak – Pennsylvania and North Carolina – the Supreme Court of the United States has been seized by the Republican camp. The case went through the judicial system of these two states, went up to the Supreme Court of the State of Pennsylvania, and then to the Supreme Court of the United States, which waived to rule on the merits, but authorized these two states to keep the electoral regulations they had enacted this year, just before the poll. There is therefore an imbroglio of local measures, in particular on the methods of voting by mail, which blur the immediate legibility of the result.

It is precisely on this point that Donald Trump bases his strategy to question the legitimacy of this vote by mail, more popular with Democratic voters. But are there any tangible elements to contest these votes?

The American poll is difficult to understand in France because most of these rules do not exist here. The French have not been able to vote by mail since 1975, because this vote was considered more prone to fraud and manipulation. This does not mean that it is frequent, but it is more likely than during a physical vote at the polling station and in the presence of assessors.

And each State can arrange the modalities of this vote by mail. Pennsylvania – Democrat – has ruled that mailed ballots could be counted if received up to 3 days after the ballot. This state has also relaxed the regulations on the counting and authentication of these ballots by mail. These elements could bring water to Trump’s mill, which has been challenging for several weeks and even today the legitimacy of these postal votes. But voting by mail is a right granted to American voters, concrete elements are needed to challenge it. And there is no indication to date that there has been any fraud, as Trump claims.

Isn’t it a dangerous signal for American democracy that Donald Trump has already declared himself the winner when millions of votes have still not been counted?

Traditionally, when we follow an election night, the numbers displayed by television channels are determined by pollsters, who make projections. For example, the state of Texas is now assigned to Trump while the vote count is still going on. And in general, these projections are good and in tune with those established by the pollsters of each candidate. But that doesn’t mean the count is over: it can go on for hours, even days and weeks with the mail-counting of votes.

There, we are in a situation where Donald Trump sees projections which show that he has created a surprise in some states, compared to the polls of recent months, which gave Joe Biden the largely winner. This is particularly the case in Florida or Iowa, where Trump wins by more than 8 points over Biden. Instead of making a statement that he looks like he’s in a good position, that he’s created a surprise again like in 2016, and that he’s confident in the final victory and will wait until all the mail votes are over. stripped, there, Trump makes Trump by already proclaiming victory, contrary to what his teams were advising him. For a president to demand that the counting stop and that he be officially declared the winner because he thinks he is in a good position to win the day after the poll is mind-boggling and unprecedented. This is unheard of in recent United States history.

And what will happen if one of the two is announced the winner today and the result is denied in a few days, when all the ballots have been counted?

There is heightened suspense in this ballot because Trump is doing better than what the polls predicted: he is the outgoing president and the pro-Trump vote is often underestimated by the polling institutes, we still see it today. .

Without commenting, do you have a prognosis on when the final and indisputable result will be known?

Everything will depend on the count, but also on the appeals filed by the Trump and Biden camps. On the one hand Donald Trump claims victory, and on the other, Joe Biden recalls that an election is not over as long as all the votes are counted, he who knows very well that the Democratic voters overwhelmingly favor the vote by mail. Everyone is ready to fight for votes. So it will also depend on the litigation that begins. The two camps have for months formed armadas of jurists and lawyers. Even before the vote on Tuesday, more than 300 administrative and judicial appeals were filed, some of which went to the Supreme Court.

In theory, as the Constitution provides, states must have finished counting their ballots and declared the final results before December 14, when the electoral college meets to approve the popular vote and choose the president.

It would be good for American democracy if the result was known sooner rather than later the confidence of Americans in the political system and in the electoral system will only deteriorate. But it is possible that this drags on because of the judicialization of this election.

In 2016, Hillary Clinton lost the election when she had several million votes ahead of the popular vote. And four years later, it’s still a mess. Are Americans not in favor of electoral system reform? At the end of the “winner take all”? And would that even be possible?

The electoral system, in particular indirect universal suffrage, is provided for by the Constitution, it is almost impossible to change it. Reform is possible, but only at the backbones.

However, there are calls for various reforms, especially in this 2020 campaign. Democratic voices, in particular Bernie Sanders, Elizabeth Warren or even Pete Buttigieg, who advocated the elimination of the electoral college to move to a direct universal ballot. Which Joe Biden did not clearly support. The Americans discovered the modalities of this election precisely in 2016, when Hillary Clinton won the popular vote but lost the Electoral College election. And that is the subject of debate.

On the other hand, the rule of “winner takes all”, according to which the “ticket” president vice-president who comes first in a state wins all the seats in the electoral college, is not enshrined in the Constitution. It could therefore be changed if there was consensus, but that is not on the agenda.