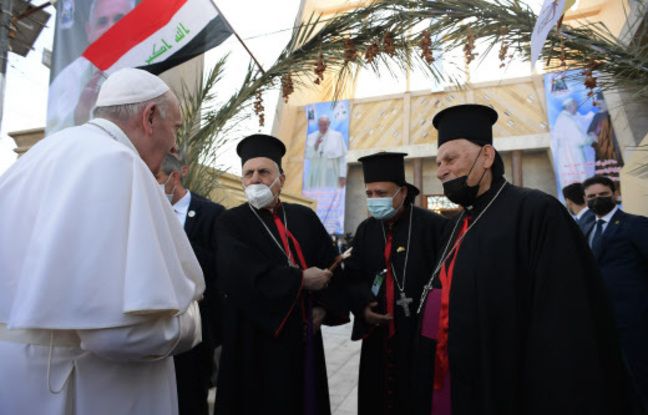 After his summit meeting in the holy Shiite city of Najaf, the pope began this Saturday the spiritual climax of his trip to Iraq: the pilgrimage to Ur, Abraham’s hometown in the south of the country, for pray for “freedom” and “unity” to end wars and “terrorism”.

It is already there, in the desert plain where the father of monotheisms was born that John Paul II wanted to come in 2000, before being prevented from doing so by Saddam Hussein. Francis, known for his hands extended in all directions to other religions, added his touch: he insisted on praying with Yazidi dignitaries [petite minorité d’Irak martyrisée par les djihadistes de l’organisation de l’état islamique (EI)] but also Sabeans or Zoroastrians [communautés multimillénaires dans le pays] and Muslims, Shiites and Sunnis.

Ali Sistani, religious reference for most of the 200 million Shiites in Iraq and elsewhere

Before that, the leader of the world’s 1.3 billion Catholics spoke for nearly an hour with Grand Ayatollah Ali Sistani, a religious reference for most of the 200 million Shiites in Iraq and elsewhere. At the end of this closed session, one of the most important religious meetings in history, Grand Ayatollah Sistani told the Pope to be committed to guarantee “peace”, “security” and “all rights. constitutional “to the Christians of Iraq.

Beyond the case of Christians, on the second day of his trip to Iraq, the first in history for a pope, Francis returned at length to the wars that have continued to tear the whole country apart for forty years and the Middle East. “Hostility, extremism and violence (…) are betrayals of religion. And we, believers, we cannot be silent when terrorism abuses religion, ”he said, while in 2014, the Islamic State (IS) group seized a third of the Iraq. We must “walk from conflict to unity” in “the whole Middle East” and “in particular in Syria, martyred”, he still pleaded.

The Pope pleaded for “freedom of conscience and religious freedom”

The day before, during an address to the authorities in Baghdad, the Pope had already mentioned Syria, where a popular revolt degenerated into all-out war just ten years ago. Despite more than 387,000 dead, talks conducted under the auspices of the UN have so far led to no progress. And, as he had already done in Morocco, another Muslim country where he had insisted on going, the 84-year-old Pope pleaded for “freedom of conscience and religious freedom”. They must be “respected and recognized everywhere” because they are “fundamental rights”, he said.

Freedom of conscience consists in being able to believe or not to believe, but also having the right to convert freely. Religious freedom, a more general term, includes in particular the freedom to exercise one’s worship without hindrance.

The Pope must continue his journey with a mass in a church in Baghdad, his first meeting with the Catholic faithful from Iraq and by far his favorite. In the central district of Karrada where the Church of Saint Joseph is located, concrete blocks are already blocking the streets and special forces are deployed.