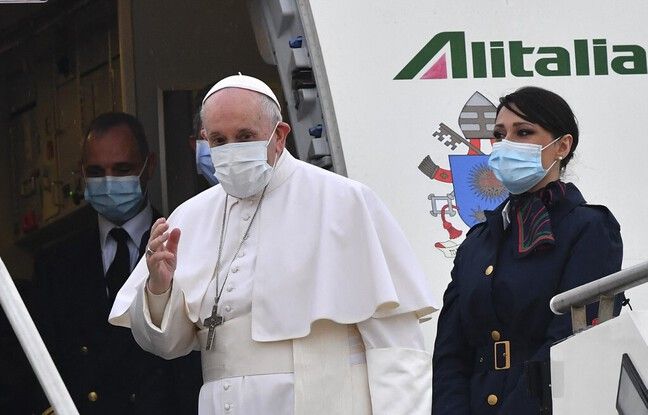 Pope Francis arrives this Friday in Iraq for a historic trip under very high protection and despite the pandemic, in a martyred country where he intends to comfort one of the oldest Christian communities in the world, devastated by conflicts and persecution. The 84-year-old sovereign pontiff, who has said he will make the first-ever papal visit to Iraq as a “pilgrim of peace,” will reach out to Shia Muslims as he meets Grand Ayatollah Ali Sistani, the highest authority for de many Shiites from Iraq and the world.

During this three-day visit, the Pope should often be alone on the roads, redone for the occasion, due to a total containment decreed in this country where the number of contaminations has broken this week a record since the beginning. of the Covid-19 pandemic, with more than 5,000 cases per day. The leader of the 1.3 billion Catholics in the world, who said he was “in a cage” in recent months at the Vatican idling, will begin in an armored car a journey without crowds, “virtual” for the Iraqis who will follow him on television and mainly by air for the Pope whose helicopter or plane will sometimes fly over areas where Daesh jihadists are still hiding.

Its stages will bring together only a few hundred people, with the exception of a Sunday mass in a stadium in Erbil in Kurdistan, in the presence of several thousand faithful. The program is ambitious. Baghdad, Najaf, Ur, Erbil, Mosul, Qaraqosh: from Friday to Monday, it will travel 1,445 km in a country still struck Wednesday by deadly rocket fire, the latest episode of Iranian-American tensions still latent.

As always, François will begin this Friday with a speech to the Iraqi leaders. Beyond the security or economic difficulties suffered by the 40 million Iraqis, they will surely evoke the additional trauma of Christians. When in 2014, Daesh took the Nineveh Plain, a Christian stronghold in the north, tens of thousands of residents fled and few now trust the police who then abandoned them, they say.

A visit to the holy city of Najaf

Cardinal Leonardo Sandri, who heads the “Congregation for Oriental Churches” in the Vatican and accompanies the Pope, believes that “a Middle East without Christians is a Middle East which has flour but not leaven and salt “. It is for this, he says, that Pope Francis will not fail to call them to stay or to return to Iraq where they are 400,000, against 1.5 million twenty years ago. A call to return “compulsory” but “difficult”, agrees Cardinal Sandri, so Iraq has been for forty years of war in political or economic crisis.

On Saturday, for the first time in history, the Pope will be received in the holy city of Najaf (south) by Grand Ayatollah Ali Sistani himself, a frail 90-year-old man who has never appeared in public. The Pope will also participate in a prayer in Ur, birthplace of Abraham in the tribal and rural south, with Shiite, Sunni, Yazidi and Sabaean dignitaries.