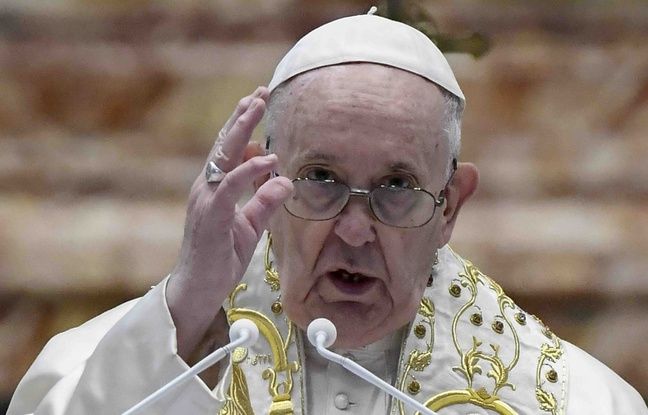 The coronavirus epidemic and armed conflict were at the heart of the Pope’s traditional Easter message this Sunday. Francis dedicated his paschal address, preceding the blessing City and the world (to the city of Rome and the rest of the world), to the most vulnerable, patients suffering from Covid-19, migrants, people thrown into precariousness by the pandemic, and populations victims of wars in Syria and Yemen, in Libya and Africa.

“The pandemic is still ongoing; the social and economic crisis is very serious, in particular for the poorest; despite this – and this is scandalous – armed conflicts do not cease and military arsenals are being reinforced, ”he lambasted.

The Sovereign Pontiff called for “to put an end to the clash of arms in beloved and martyred Syria, where millions of people now live in inhuman conditions, as well as in Yemen whose events are surrounded by deafening silence and scandalous, and in Libya where we can finally see the end of a decade of disputes and bloody clashes ”.

He also spoke of those who in Burma, the scene of a coup d’état and demonstrations bloodily suppressed by the military, “are committed to democracy by making their voices heard peacefully”. He called on the international community to come to the aid of the “Lebanese people who are going through a period of difficulties and uncertainties” and said he hoped that “Israelis and Palestinians will regain the strength of dialogue to reach a stable solution”, repeating his support to a two independent state solution.

The Pope hailed “the path of pacification undertaken” in Iraq, where he went in March – the Argentine’s first trip since November 2019 -, blasted “internal violence and international terrorism” in the Sahel and Nigeria, and called for the release of prisoners in the conflicts in Ukraine and Nagorno-Karabakh.

He delivered his homily from the sparse pews of St. Peter’s Basilica, while Easter celebrations usually attract tens of thousands of pilgrims to the Vatican. Italy, on this sunny holy weekend, returned to containment to avoid popular and family gatherings in a country already hard hit by the pandemic which has killed more than 110,000 people there.

Regarding the epidemic crisis, Jorge Bergoglio, after paying tribute to the doctors and nurses on the front line, recalled that “vaccines are an essential instrument in this fight”.

“In the spirit of an ‘internationalism of vaccines’, I therefore urge the entire international community to a shared commitment in order to overcome the delays in their distribution and to promote their sharing, in particular with the poorest countries” .

All over the world, he stressed, “the pandemic has unfortunately dramatically increased the number of poor and the despair of thousands of people”, calling on “public authorities” to offer them “the aid necessary for sufficient subsistence” .

Francis had previously celebrated the Mass of the Resurrection in the presence of a hundred people. Friday evening, he had chaired his second Stations of the Cross in a row in Saint Peter’s Square without an audience because of the Covid, but with the participation of Italian children. And he had celebrated Palm Sunday March 28, which marks the start of the Holy Week of Easter, in the presence of a hundred faithful and thirty religious.

The 84-year-old Argentine pope has significantly reduced his public appearances since the start of the pandemic, who usually takes walkabouts, willingly shakes hands with worshipers and kisses children.