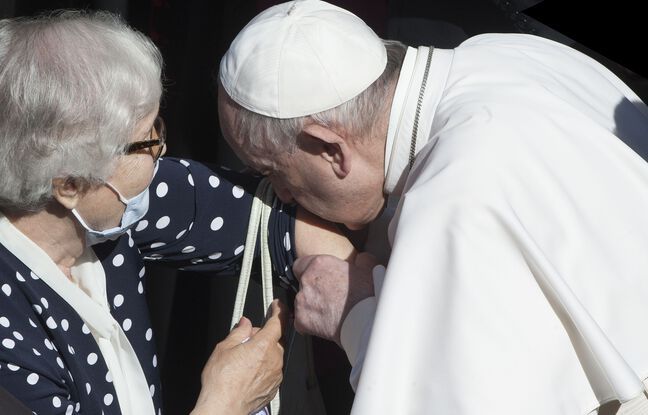 Pope Francis, who has returned for two weeks to his traditional general audiences with the public, on Wednesday kissed the tattoo of a Holocaust survivor who escaped the experiments of Doctor Josef Mengele.

Lidia Maksymowicz is a Polish woman of Belarusian origin, survivor of the Auschwitz-Birkenau camp where she was deported at the age of three, in 1943. This woman rolled up her sleeve when she met the Pope on Wednesday after the general audience in the open air in a courtyard of the Apostolic Palace. François – who had visited the Auschwitz camp in 2016 – then leaned down to kiss his tattoo, number 70072.

“We understood each other with the eyes”

Moved, the survivor who became Catholic spontaneously embraced the sovereign pontiff in her arms. She then gave him several presents, including a headband that all Polish prisoners use during commemorative ceremonies, or a painting that represents her as a child hand in hand with her mother after being disembarked from a train at the entrance to the camp.

“We understood each other with our eyes, we did not need to speak,” she confided after her meeting with the Pope, to the official Vatican news site.

In testimonies during Remembrance Days, Lidia recounted having lived in the filthy block of the children of the concentration camp where she underwent medical experiments by Doctor Josef Mengele, such as inoculation of viruses, vaccines and poisons.

“I am one of the rare survivors”

“All the children knew who Mengele was and were terrified of him. I consider that I have a mission to tell this story, I owe it to those who died ”, she told in January during a virtual meeting with hundreds of young Italians.

“I am one of the few survivors. More than 200,000 children died there, ”she said, remembering that her 22-year-old mother was trying to send her croutons of bread.

Adopted and saved by a Polish family, she will finally find her real mother in Moscow in 1962 thanks to their tattoos which included the same numbers. Received with great fanfare at the Kremlin, she stayed in Moscow for two months before returning to Poland to find her adoptive family.

Share
Facebook
Twitter
Pinterest
WhatsApp
Previous articleMany French people want to leave… and many have not yet booked
Next articleGenocide in Rwanda: “I have come to recognize our responsibilities”, declares Emmanuel Macron in Kigali