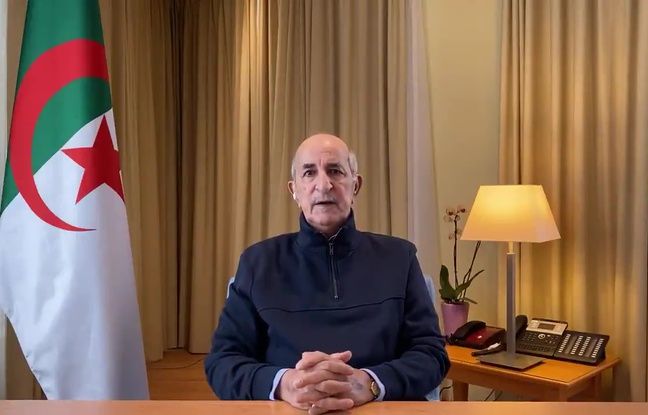 A speech delivered the day after the first anniversary of his electoral victory… after two months of heavy silence. Algerian President Abelmadjid Tebboune appeared on public television on Sunday for the first time in nearly two months and his hospitalization in Germany to be treated for the coronavirus.

“I am recovering. It will take another two or three weeks for me to regain my physical strength, ”said Abelmadjid Tebboune, 75, visibly thin, in a“ speech to the people ”.

While his prolonged absence had fueled rumors and disinformation, the Head of State promised to be back among Algerians “as soon as possible”, in this speech on his Twitter account relayed by public television. Abelmadjid Tebboune’s last public appearance dated back to October 15 when he met French Foreign Minister Jean-Yves Le Drian. Several times, the Algerian authorities have announced the “imminent” return of the president to the country since his hospitalization in Germany.

As of October 24, this heavy smoker, had voluntarily placed himself in isolation after having been in contact with officials contaminated by the disease of Covid-19. He was then admitted on October 28 in “one of the largest specialized establishments” in Germany “after contracting the virus.

Coming to power on December 12, 2019 with reform inclinations, Abelmadjid Tebboune today embodies a country in impasse and blocked institutions. Like a return to the past, after the hopes of the protest movement (Hirak).

The absence of the Head of State plunged Algeria back into the humiliating pangs of the end of the reign of his predecessor Abdelaziz Bouteflika, when the latter, struck by a stroke in 2013, continued, helpless and aphasic, to assume the presidential charge before being ousted from power in April 2019 by the Hirak.

Political uncertainty had prompted certain voices to demand the application of article 102 of the Constitution, relating to the vacancy of power, in order to avoid an institutional crisis. In the event of the president’s illness or resignation, it is up to the Constitutional Council to ascertain the incapacity of the Head of State. It is the acting president of the Senate, in this case Salah Goudjil, an 89-year-old veteran of the war of independence, who acts in the interim for a maximum period of 90 days, pending the election of ‘a new president. Pillar of the regime, the army remains the great mute.

Officially, Abelmadjid Tebboune still holds the reins of the state. But the latter has not been able to exercise any of his prerogatives for nearly two months: he has not promulgated the new Constitution – a flagship project of his electoral program – nor signed the 2021 Finance Law.

Elected in a ballot widely shunned by the population and therefore suffering from a lack of legitimacy, he first extended a hand to the “blessed Hirak”, an anti-regime movement suspended due to the Covid-19 epidemic. A year after the presidential election, it is clear that Hirak activists, political opponents, journalists and bloggers close to the protest are still the target of legal proceedings, when they are not imprisoned.

On the market-economic level, Algeria is seeing its foreign exchange reserves melt, liquidity drying up and an oil market still depressed by the health crisis.