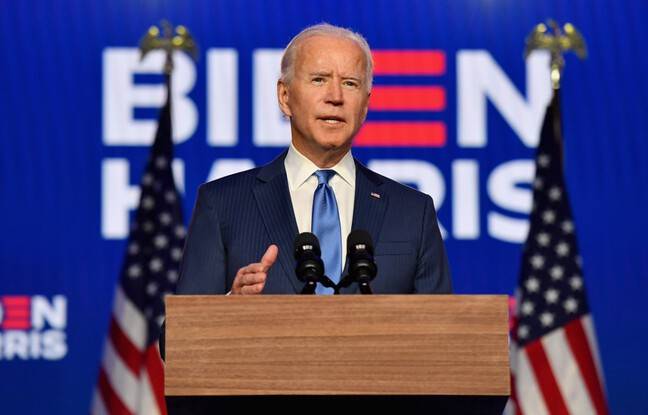 A speech of appeasement and reconciliation. Democrat Joe Biden, declared the winner of the election in the United States by most of the American media, promised this Saturday to be “the president of all Americans”.

“I am honored and humbled by the trust the Americans have placed in me and the Vice President-elect,” Kamala Harris, Joe Biden said in a statement.

America, I’m honored that you have chosen me to lead our great country.

The work ahead of us will be hard, but I promise you this: I will be a President for all Americans — whether you voted for me or not.

I will keep the faith that you have placed in me. pic.twitter.com/moA9qhmjn8

“With the campaign over, it is time to leave the anger and fiery rhetoric behind and come together as a nation,” he added.

Became the first woman elected vice-president of the United States, Kamala Harris, she promised on Saturday to “get to work” without delay to restore “the soul of America”, in her first statement after the announcement of Joe Biden’s presidential victory.

We did it, @JoeBiden. pic.twitter.com/oCgeylsjB4

“In this election it’s about a lot more than Joe Biden or myself. It is about the soul of America and our determination to fight for it. We have a lot of work ahead of us. Let’s get to work, ”she tweeted.

Trump is not giving up

The handover with Donald Trump at the White House promises to be tense, however. As crowds flock to the White House to celebrate Biden’s victory, the outgoing president did not seem to want to acknowledge his opponent’s victory.

“We all know why Joe Biden is rushing to present himself falsely as the winner and why his allies in the media are trying so hard to help him: they do not want the truth to come out,” the US president wrote on Saturday coming out in a press release. “The simple observation is that this election is far from over,” he said.

Trump not giving up pic.twitter.com/RWY7QHLZza