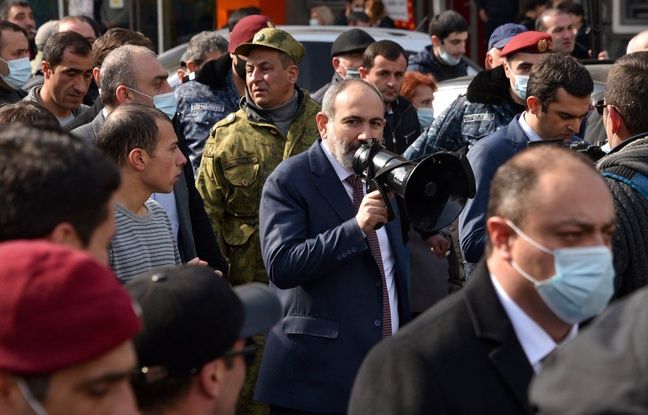 Armenian Prime Minister Nikol Pachinian on Thursday denounced an attempted military coup and led a demonstration by his supporters to reassert his authority, weakened by the defeat of the army in Nagorno Karabakh.

The Kremlin, saying it is “concerned” by the situation, called for “calm” in this former Soviet Caucasian republic, a traditional ally of Russia. Turkey, the sworn enemy of Armenia, for its part said “firmly” to condemn the “attempted coup” in Armenia.

“We need dialogue rather than confrontation”

Nikol Pachinian had denounced Thursday morning an “attempted military coup” on Facebook, his favorite means of communication. Then he called on his supporters to join him in the street to denounce the army staff, which issued a statement demanding his resignation because of the dismissal of a high-ranking officer.

With a decided step, megaphone in hand, the 45-year-old Prime Minister took the lead of hundreds of his supporters. “The situation is tense but everyone agrees that there should be no clashes (…) the situation is manageable”, he said, qualifying the call of the soldiers to his departure of “Reaction under the influence of emotion”. “We need dialogue rather than confrontation,” he added, the crowd applauding him and chanting his name.

Nikol Pachinian also estimated that the generals who called for his resignation remained “brothers”, like the chief of staff, Onik Gasparian, whom he sacked Thursday morning.

The opposition points to a risk of “civil war”

The opposition, which demands the departure of Nikol Pachinian since the Armenian military defeat against Azerbaijan in Nagorno Karabakh at the end of 2020, has for its part reiterated this demand, believing that it risked leading Armenia to “civil war”. “.

“The army’s statement is a turning point. We call on Nikol Pachinian not to lead the country into civil war and bloodshed. Pachinian has one last chance to leave without there being any disturbances ”, judged the party Armenia Prosper, the main opposition formation.

The powerful Armenian Apostolic Church called on the political forces to find a solution “at the negotiating table for the good of the motherland and the people”.

Wednesday, Nikol Pachinian had sacked Tigran Khatchatrian, the deputy chief of staff, triggering the anger of the military command which in return demanded his resignation, judging that the Prime Minister was “no longer able to take decisions that are needed ”. They accused him of “attacks intended to discredit the armed forces”.

Tigran Khatchatrian had mocked in the press statements by Nikol Pachninian questioning the reliability of a Russian weapon system, the Iskander missile launchers, during the Karabakh conflict.

“I am taking urgent measures to defuse tensions”

Armenian President Armen Sarkissian, whose functions are largely honorary, announced Thursday that he is working on “urgent measures to defuse tensions. I call on everyone – state bodies, law enforcement, political forces and all citizens – to exercise restraint and common sense, ”he added.

For his part, Nikol Pachinian on Thursday ordered the army to “do its job”. “The army cannot take part in political processes and must obey the people and the elected authorities,” he said to a crowd of his supporters gathered in the center of the capital Yerevan.

The Armenian Prime Minister has for weeks been under pressure from the opposition and from recurring protests, demanding his resignation because of Armenia’s military defeat against Azerbaijan in the fall of 2020 in the conflict of Nagorno Karabakh. So far he had the backing of the military. At the end of the war, she and Nikol Pachinian, faced with the risk of a real debacle, had accepted the conditions of a ceasefire negotiated by Russian President Vladimir Poutin and which involved significant territorial losses. for Armenia.

Yerevan still de facto controls, thanks to the presence of Armenian separatists, most of the Nagorny Karabakh region. But Armenia has lost the symbolic city of Choucha, as well as a glacier of Azerbaijani territory surrounding the region and which it has controlled since the 1990s. to snatch the departure of the Prime Minister who had ensured almost to the end of the conflict, which lasted from September to November 2020 and left more than 6,000 dead, that his forces had the advantage.