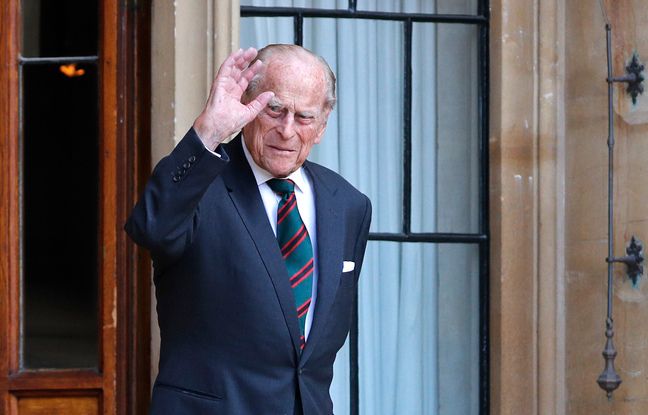 Prince Philip, husband of Queen Elizabeth II died on Friday at the age of 99, Buckingham Palace has reported. Prince Charles’ father was hospitalized last February and was able to return home in March, after a long stay of one month for an infection and then a heart problem.

“It is with deep sorrow that Her Majesty the Queen announces the death of her beloved husband Prince Philip, Duke of Edinburgh”, according to a statement from Buckingham, specifying that Prince Philip, who had been hospitalized recently, is died “peacefully this (Friday) morning at Windsor Castle”.

British flags were half mast at Buckingham Palace on Friday after the death at 99 years of Prince Philip, husband of Queen Elizabeth II. A note announcing the death of the Duke of Edinburgh was posted on the palace gates, according to images broadcast by British televisions.

Returning to Windsor Castle after hospitalization

Prince Philip, who was due to celebrate his hundredth birthday in June, was admitted on February 16 to a private hospital in the British capital, King Edward VII. He had returned there to continue his convalescence after having undergone “successfully”, at the beginning of March, an intervention for a pre-existing heart problem in another London establishment, St Bartholomew’s Hospital, with the largest specialized cardiovascular service in Europe.

Renowned for his strong character but also for his blunders, the Duke of Edinburgh was hospitalized in February as a “precaution” after feeling ill. Buckingham Palace had specified a few days later that this hospitalization was due to an infection. If his transfer for his heart problems had raised fears of a deterioration in his state of health, his relatives had wanted to be reassuring. Prince Charles had visited him in the hospital.

An officer of the Royal Navy

Prince Philip, born in Corfu on June 10, 1921 with the titles of Prince of Greece and Denmark, in 2009 broke the record for the longevity of the spouses of British monarchs held by Charlotte, wife of George III. Sent to Scotland to follow his education, he studied in 1939 in the British army, at the Royal Naval College in Dartmouth (southern England).

At that time he met Princess Elizabeth for the first time. Their union was celebrated on November 20, 1947. They had four children (Charles, Anne, Andrew and Edward). The Duke of Edinburgh retired in August 2017, having participated in more than 22,000 official public engagements since his wife’s accession to the throne in 1952.

He had already suffered several hospitalizations since 2017, the most recent dating back to December 2019 for “pre-existing health problems”, but never so long. In January 2019, he was in a spectacular car accident when his Land Rover crashed into another vehicle coming out of a driveway in Sandringham Estate and overturned. Unscathed, he had then given up driving.

Prince Philip and Elizabeth II celebrated their platinum wedding anniversary in November 2017 at Windsor Castle. The bells of Westminster Abbey, where they were married on November 20, 1947, rang for more than three hours on this occasion to pay their respects.