Protests against the military junta do not weaken after the coup 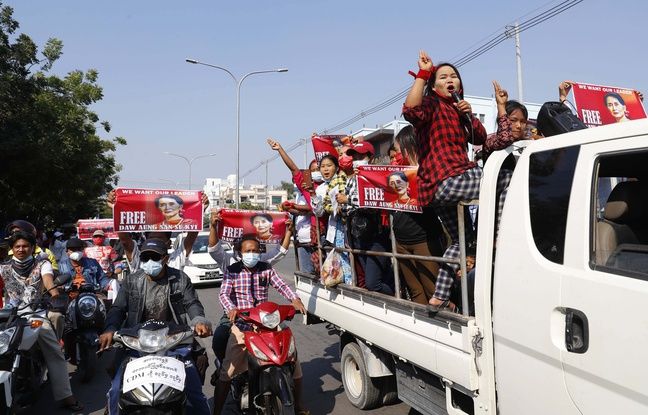 For the eighth day in a row, tens of thousands of people took to the streets this Saturday in Burma. Their goal: to protest against the military in power since the coup d’état perpetrated in the country on February 1, bringing down Aung San Suu Kyi. Demonstrations took place in Yangon and other cities. Naung Po Aung, a remote village of 7,500 inhabitants in the north of the country, even hosted a parade of several hundred people, underlining the scale of the opposition to the coup.

Another means of contestation: Friday evening, citizen vigilance committees were set up spontaneously, responsible for monitoring their neighborhood in the event of operations carried out by the authorities to arrest opponents. A video filmed in a district of Rangoon showed in particular many inhabitants invading the street, defying the curfew introduced at 8 p.m., after rumors of a raid by the police who had come to arrest dissidents.

Mya, 20, icon of the anti-junta movement

The protests bring together different parts of society, from monks in saffron robes to players of the national football team. The protests went largely smoothly, but this week law enforcement officials used tear gas and water cannons.

Two demonstrators were seriously injured by live ammunition, including a 20-year-old Mya, still in critical condition, who has become an icon of the anti-junta movement.

But the pressure on the junta does not come only from within the country. Since the putsch, “more than 350 political leaders, state representatives, activists and members of civil society, including journalists, monks and students have been detained”, noted the UN during the an extraordinary session of its Human Rights Council on Friday, deeming the use of violence against demonstrators “unacceptable”.

At this meeting, the regime of the generals came under pressure with the adoption of a resolution demanding the immediate release of Aung San Suu Kyi. Washington for its part announced new sanctions against soldiers, including their leader Min Aung Hlain.

The Internet giants also weigh heavily on the international scene. They denounced a cybersecurity bill that will allow the junta to force them to transmit user metadata.

Facebook, the main medium of communication for millions of Burmese, said it would reduce the visibility of content managed by the military, saying the army was spreading “false information”.