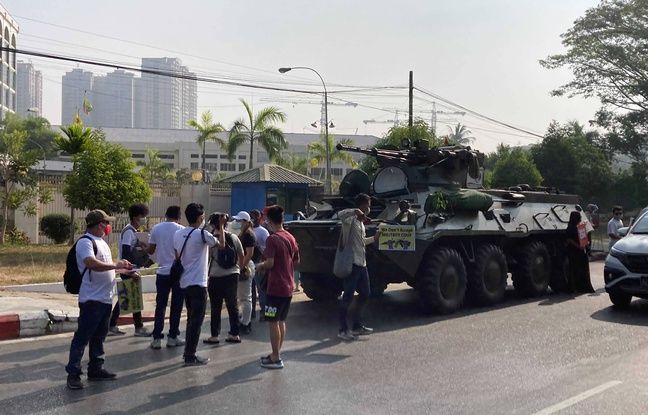 The intensification of the repression does not bend the opponents of the new regime in Burma. Pro-democracy protesters took to the streets again on Monday, as the junta fired on protesters the day before, deployed troops in several cities and temporarily cut the Internet.

Several hundred engineers and students gathered in the north of Rangoon, the economic capital. Not far from there, near the headquarters of the Central Bank, protesters were demonstrating in the middle of army vehicles, carrying signs: “We support calls for civil disobedience”, “join the movement”. Others gave the three-fingered salute as a gesture of resistance. The police, supported by water cannons and armored vehicles, were visible in some places in Yangon, but without a massive military presence at this stage.

The day before, soldiers had deployed to several cities and the Internet was virtually cut off for much of the night from Sunday to Monday. Connections were reestablished on Monday morning, according to monitoring NGO NetBlocks.

The February 1 coup overthrew Aung San Suu Kyi’s civilian government and ended a fragile 10-year democratic transition. His pre-trial detention should normally expire on Monday. His lawyer, Khin Maung Zaw, could not be reached for comment on what was to happen.

The fear of reprisals is on everyone’s minds in the country, where the popular uprisings of 1988 and 2007 were bloodily suppressed by the military. In Myitkyina (north), several people were injured on Sunday when the security forces fired to disperse demonstrators. However, a local journalist could not say whether live bullets or rubber ammunition had been used. Politicians, activists, doctors, students: some 400 people have been arrested in total since the putsch. In reaction, citizen vigilance committees have spontaneously emerged: residents are responsible for monitoring their neighborhood in the event of operations carried out by the authorities to arrest opponents.

Events remain at the heart of the international agenda. UN Secretary General Antonio Guterres on Sunday urged the junta to “ensure that the right to peaceful assembly is fully respected”, asking the generals to “urgently” authorize Swiss diplomat Christine Schraner Burgener to come on site “to directly assess the situation”.