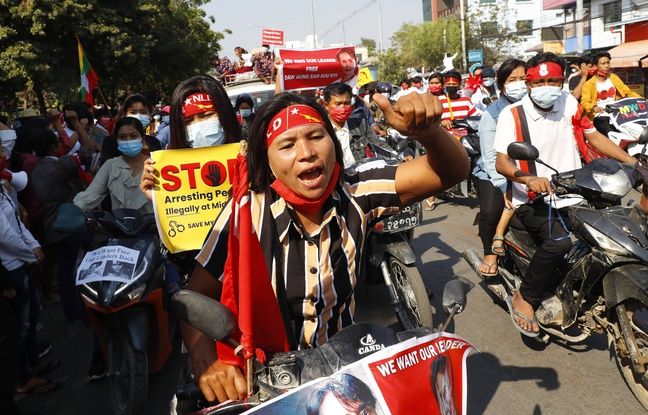 Deaf to growing criticism and faced with a mobilization that does not weaken, the junta in power in Burma on the contrary increases its repression against the massive demonstrations organized against their coup, by increasing the number of nocturnal arrests. The decade-long democratic experiment came to an abrupt end almost two weeks ago with the military seizure of power, toppling and arresting de facto head of government Aung San Suu Kyi.

This Sunday morning, for the 9th day in a row, the Burmese began to take to the streets, gathering by the hundreds near the famous Shwedagon Pagoda in central Yangon, the largest city in Burma, to demand the return of the democracy and the liberation of their leader. The junta led by General Min Aung Hlaing has published a list of seven of the country’s most renowned activists, which it is actively seeking for having encouraged the protests.

Since the start of the movement, the military has already detained around 400 politicians, activists and members of civil society, including journalists, doctors and students. Among the list of the seven “fugitives” is notably Min Ko Naing, a figure of the student movement of 1988, who spent more than ten years in prison. The 1988 protests made Aung San Suu Kyi the main democratic figure in Burma, and the 1991 Nobel Peace Prize winner spent years under house arrest, a prisoner of the generals, before coming to power in 2015.

Arrested again on February 1, the one who headed the de facto government has not been seen since, even though her party has informed that she was “in good health” held in secrecy at a residence in Naypyidaw, the administrative capital. of Burma. Min Aung Hlaing on Saturday gave emergency powers to the police, who can conduct house searches without a warrant or detain people for a short period without permission from a judge.

The UN blocked by China and Russia

On Friday evening, citizen vigilance committees spontaneously sprang up across Burma, responsible for monitoring their neighborhood in the event of operations carried out by the authorities to arrest opponents. A video filmed in a district of Yangon showed many residents invading the street, defying the curfew imposed at 8 p.m., after rumors of a raid by the police who had come to arrest dissidents. For their part, hundreds of monks organized a prayer in front of the American Embassy.

“The Burmese want democracy, and we support them,” the embassy tweeted in a message of solidarity. The situation in Burma has been the subject of numerous international condemnations for the past two weeks, but nothing likely to move the military. An emergency meeting of the UN Human Rights Council on Friday called on the new regime to release all those “arbitrarily detained”, including Aung San Suu Kyi, and return them to power. But traditional allies of the Burmese army, including Russia and China, are calling for no interference in Burma’s “internal affairs”.