Pubs and stadiums reopen this Monday despite the Indian variant 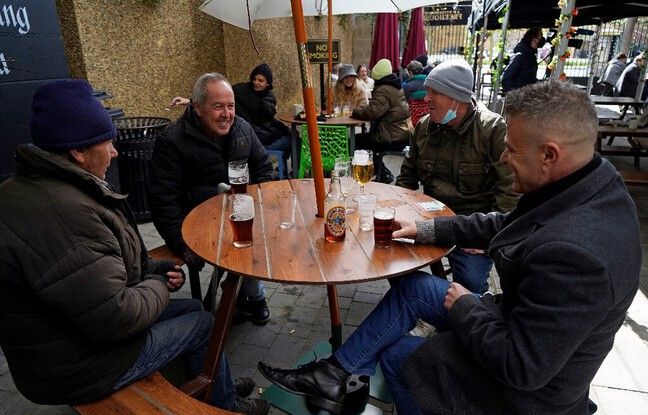 Despite concerns about the progression of the Indian variant, which could call into question the final lifting of restrictions, the United Kingdom is taking a major step in its deconfinement, this Monday, with the reopening of indoor pubs, stadiums, hotels and cultural places.

The most damaged country in Europe by the coronavirus pandemic with nearly 128,000 dead, the United Kingdom has seen its health situation improve markedly after strict confinement during the winter and a vigorous vaccination campaign.

But recent outbreaks of the Indian variant, especially in the north-west of England, have darkened this picture. While asking the British to be “careful”, Prime Minister Boris Johnson said there was, at this stage, no reason to postpone Monday’s easing, with the reopening of pubs and restaurants in the region. interior – the terraces reopened in April – hotels, cultural venues and stadiums with up to 10,000 spectators.

Banned for many months, reunions at home are again authorized – but limited to six people or two households maximum -, as well as holidays abroad, even if only a few destinations are exempt from quarantine on return. In Scotland, where the local government decides its own deconfinement schedule, the relaxation of some restrictions does not apply to areas experiencing outbreaks, such as Glasgow.

Boris Johnson welcomed this new “milestone” in a statement, but called for it to be approached with “a great deal of caution”. He stressed that the spread of the variant was being placed “under close surveillance” and that “early action” was being taken to counter it. The number of cases attributed to the B1.617.2 variant in the UK has more than doubled in one week, to more than 1,300 last week. If it turns out to be highly contagious, the lifting of almost all restrictions in England, scheduled for June 21, could be called into question, the Tory leader said. A decision will be made a week earlier.

In the immediate term, to halt its progression, screening has been stepped up in the affected areas and the interval between the two doses of vaccine has been reduced to eight weeks (up to three months currently) for those over 50 years old. According to Health Minister Matt Hancock, there is “a high degree of certainty” that the vaccines are effective against the variant. Since the start of the vaccination campaign in early December, more than 36 million people have already received a first dose, and some 20 million have been fully vaccinated, or nearly 40% of the adult population. The government plans to have administered a first dose to all adults by the end of July.

Up to 50% more contagious

Faced with the grand reopening on Monday, the scientific committee advising the government (Sage) was much more circumspect. He estimated that there was a “realistic possibility” that the variant was up to 50% more contagious than that which appeared in late 2020 in England. The latter had led to an outbreak of contaminations and deaths, forcing the United Kingdom to reconfigure itself in January for long months. Therefore, he warned, the relaxation could “lead to a substantial increase in hospitalizations, similar or greater than the previous peaks”, when the health services were on the verge of saturation.

Already criticized for not having immediately taken the measure of the extent of the health crisis at the start of the pandemic, the government denied having delayed taking action in the face of the emergence of the variant, by not hardening more Quick restrictions for travelers coming from India. He said he did not postpone the decision to subject British residents to quarantine at the hotel upon their return due to Boris Johnson’s official visit to India in April. This trip, the first major abroad for the leader since Brexit, had finally been canceled due to the sharp worsening of the health crisis in this country.