Pyongyang launches two projectiles in the Sea of ​​Japan, “ballistic missiles” according to Tokyo 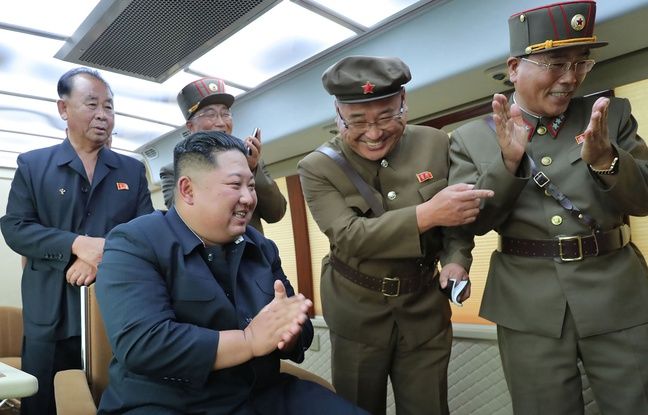 New shots in North Korea. Pyongyang launched two missiles into the Sea of ​​Japan on Thursday. The shooting was first announced in Seoul, where the South Korean Joint Chiefs of Staff said in a statement that two “unidentified projectiles” had been launched into the Sea of ​​Japan, known as the “East Sea”. in Korea, from South Hamgyong Province, located in east-central North Korea.

The missiles traveled a path of 450 kilometers and reached a maximum attitude of 60 kilometers, said the South Korean general staff, who did not specify precisely what type of device it was.

“Ballistic missiles” according to Japan

The Blue House, the South Korean presidential palace, announced an imminent meeting of the national security council, indicating that the South Korean army had “strengthened its posture of surveillance, in close coordination with the United States”, main ally from South Korea.

In Japan, another regional ally of the United States, Prime Minister Yoshihide Suga was adamant that the projectiles launched on Thursday were ballistic missiles. “It threatens the peace and security of our country and the region. It is also a violation of the UN resolution, ”said the head of the Japanese government.

“A violation of the UN resolution”

Several resolutions of the Security Council of the United Nations prohibit the power of Pyongyang from continuing its nuclear weapons and ballistic missile programs. But North Korea, although hit by multiple international sanctions, has rapidly developed its military capabilities in recent years under the leadership of its leader Kim Jong Un. It has carried out several nuclear tests and successfully tested ballistic missiles capable of ‘reach the United States.

North Korea launched two missiles on Sunday shortly after a visit to Seoul by Secretary of State Antony Blinken and Secretary of Defense Lloyd Austin. It was the first known North Korean shot since President Joe Biden arrived at the White House. But US officials later said they were two short-range, non-ballistic missiles. These officials had therefore minimized the importance of the shots by explaining that these devices were classified “in the category of normal military activities in the North”.

The launch of such devices, if confirmed, would pose a challenge for the administration of US President Joe Biden. Thursday’s launch “signals the start of Pyongyang pressure on Washington for nuclear talks,” said Yoo Ho-yeol, professor emeritus of North Korean studies at Korea University.

U.S. officials said the Biden administration had attempted to contact Pyongyang through several channels since arriving, but had not received a response.