Quebec begins its deconfinement with the reopening of terraces 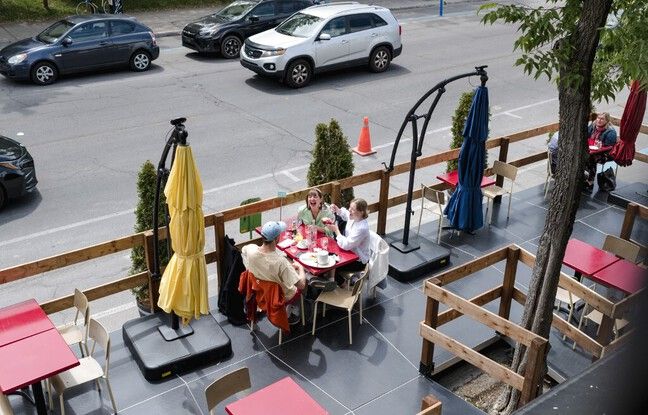 Quebecers were able to enjoy the joy of being on the terrace on Friday with the lifting of many anti-Covid restrictions. It was, however, a rather chilly restart that restaurants experienced as most of the terraces were empty in the morning due to the cold weather. And the restaurant terraces are reopening for the moment at 50% of their capacity and on a limited basis since only tables of two people are accepted.

“The temperature did not help us, it was 6 this morning, so the terrace has not been too busy yet”, explained Laurent Pellerin, waiter at the restaurant Le Pontiac. A few rare people braved the cold to take a seat around a table. “It’s a good opportunity to come and encourage a local business,” said Chloé El-Sayegh, 27, seated on a terrace, a beer in hand. “The social side has been very difficult in the last year, so it’s really fun to be able to find a certain semblance of normal life,” said Béatrice Bernard-Poulin, 34 years old.

As for restaurateurs, David Zaltzman, co-owner of the Notre-Boeuf-de-Grâce restaurant in the Plateau district of Montreal, was delighted with the reopening of his establishment: “It’s very exciting, we are outside, we can finally work. . “

The curfew has been lifted

This Friday also marks the easing of other health measures in Quebec: the curfew introduced in January, unprecedented in Canada at the level of a province since the Spanish flu epidemic, has been lifted. In addition, travel between regions within the province is once again authorized, and outdoor stadiums and large performance halls will be able to accommodate up to 2,500 people in several zones of 250 people.

These measures were announced thanks in particular to the success of the vaccination campaign: to date, more than 58% of the population has received a first dose of vaccine, according to data from the National Institute of Public Health of Quebec (INSPQ ). Quebec, which has about 8 million inhabitants, recorded some 369,000 cases of coronavirus on Friday and 11,100 deaths.