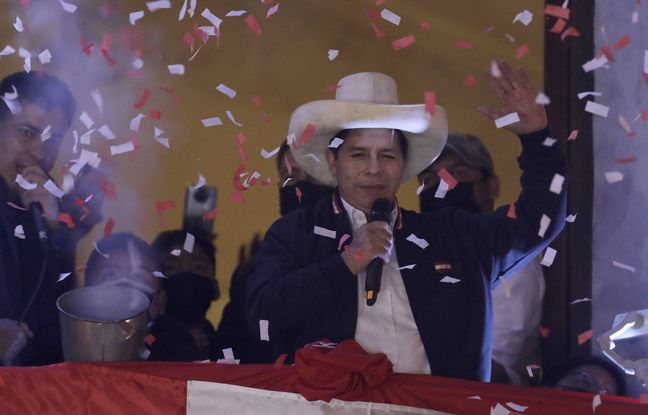 End of the suspense in Peru. A month and a half after the June 6 second round ballot where he faced the populist right-wing candidate Keiko Fujimori, the radical left candidate and new to politics, Pedro Castillo, was officially proclaimed the winner of the presidential election. this Monday.

“I proclaim President of the Republic José Pedro Castillo Terrones”, declared the president of the National Electoral Jury (JNE), Jorge Luis Salas, during a brief virtual ceremony which ends weeks of suspense after a particularly tight ballot.

“I would like to greet the electoral authorities (…) also greet the political parties which took part in this democratic celebration,” said Pedro Castillo, shortly after the proclamation, in front of hundreds of supporters gathered at the headquarters of his Peru Libre party in Lima. “I have an open heart for each of you, there is no resentment in this chest,” said the former teacher from the balcony of the party headquarters, wearing his traditional white hat, typical of his native province of Cajamarca (north). “I ask Ms. Keiko Fujimori (…) to ensure that the country advances,” he added.

The electoral authority responsible for examining the appeals confirmed on Monday the results delivered several weeks ago by the National Body of the Electoral Process (ONPE) which organized the poll.

“A teacher, an Andean, a cholo (mixed race)”

Hundreds of supporters of the president-elect, who had camped for weeks in front of the JNE headquarters in central Lima, burst into joy as they sing and dance to traditional Peruvian rhythms.

“We finally have a president! Rosa Huaman, 27, rejoiced to AFP as the crowd chanted “We did it!” “.

“We had been waiting for 200 years for a teacher, an Andean, a ‘cholo’ (mestizo) to come to power and rule for everyone,” said Caledonio Ayala, 38, from the Huanuco region (center ).

Shortly before the announcement of the final result, Keiko Fujimori, who had insinuated at the beginning of July that she would not recognize the victory of her competitor, did an about-face.

“I announce that by fulfilling my commitments, my commitment to all Peruvians (…) to the international community, I will recognize the results because it is what the law and the Constitution require, which I have sworn to defend. », She declared at a press conference. “I call on Peruvians not to give up and to implement democratic defense,” she added.

The daughter of Alberto Fujimori, who is serving a 25-year prison sentence for corruption and crimes against humanity, had hitherto multiplied the accusations of “fraud” against her opponent and demanded the invalidation of several tens of thousands of votes.

Targeted by an investigation for alleged bribes during her presidential campaigns of 2011 and 2016, where she had already failed in the second round, she served 16 months of preventive detention and, lacking presidential immunity, now risks 30 years in prison.

Ballot deemed free and transparent by the EU

Contrary to his accusations, the observation mission of the Organization of American States (OAS), the United States and the European Union had deemed the ballot free and transparent.

“We value our deep ties (with Peru) and are impatient to strengthen them with President-elect Pedro Castillo”, reacted Monday evening the Embassy of the United States in Lima.

For its part, the Venezuelan government celebrated the “indisputable” election of Mr. Castillo and expressed its wish to “develop a bilateral relationship of cooperation”, according to a statement from the Ministry of Foreign Affairs.

Pedro Castillo and Keiko Fujimori were the surprise winners on April 11 of an undecided first round with 18 contenders. Released from anonymity in 2017 thanks to a strike movement by teachers of which he had led, the leader of the left-wing minority party Peru Libre proposed during the campaign a series of nationalizations and the end of certain imports. to strengthen local industry.

Keiko Fujimori and his supporters waved the red rag, accusing him of wanting to turn Peru into some kind of North Korea or Venezuela, and lead it to ruin and dictatorship.