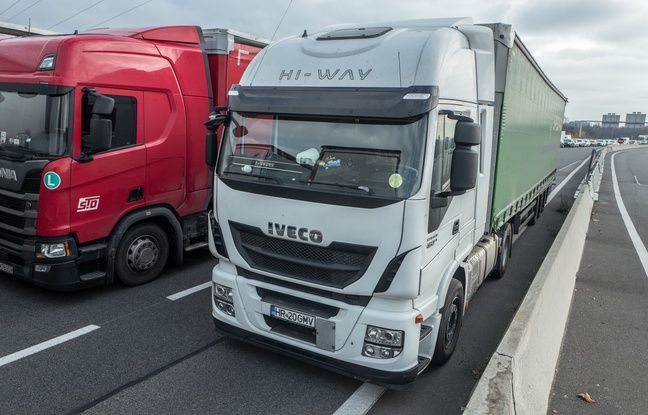 To absorb the thousands of trucks still stranded around Dover due to a new strain of coronavirus, rail and sea links between the United Kingdom and France will continue to be provided during Christmas, with traffic normally being interrupted today – there, said the British Minister for Transport.

Traditionally, public transport has been interrupted in the UK on Christmas Day and only partially resumes the next day.

The truckers stranded for four days

“As the screening continues in Kent” (south-east), “I spoke to a French counterpart (Jean-Baptiste Djebbari) and we agreed that the border between UK and France at Eurotunnel, Dover and Calais would remain open throughout Christmas to allow truck drivers and citizens to return home as soon as possible, ”Grant Shapps said on Twitter. Thousands of European truck drivers spent a fourth night in the cabin of their truck, in rough conditions, stuck around Dover, the first cross-Channel port, waiting to pass a Covid test in order to be able to cross the Channel.

According to the British Department for Transport, some 6,000 heavy goods vehicles were waiting early Wednesday evening to cross the border, including 3,750 vehicles parked at the old Manston airport, where drivers can undergo a test, the others being stranded on the roads. Kent roads. The massive screening operation began late Wednesday, with the support of the military, under an agreement between London and Paris to resume traffic to France, which had been suspended after the identification of ‘a potentially more contagious variant of the virus in the UK.

According to the Ambassador of France to the United Kingdom, Catherine Colonna, a team of 26 French firefighters arrived early Thursday in Dover with 10,000 tests to help the British and “accelerate the passage of truckers to the continent”. It is also about allowing the British supply chain, very dependent on truck rotations, to come back to full speed before shortages arise, and to allow European citizens to reach the continent.

The European Commissioner in charge of transport, Adina Valean, estimated that in all, 10,000 European truckers were having difficulty returning from the United Kingdom, criticizing France for having imposed restrictions on them, criticisms rejected by Paris. According to her, the screening capacity is 300 tests per hour. More than 50 countries around the world have imposed restrictions on travelers from the United Kingdom after news of the appearance in the country of a variant of Covid-19.

Share
Facebook
Twitter
Pinterest
WhatsApp
Previous articleFrom Canada to France, this is how we celebrate Christmas around the world
Next articleThe CSE of Hop! promises a “big legal battle” against the departure plan planned by the management