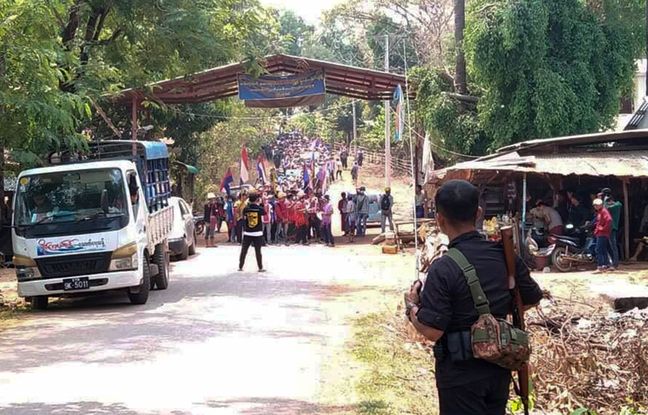 Ten of Burma’s main rebel factions began a two-day meeting on Saturday to “re-examine” their position on the ceasefire agreement signed from 2015 with the army, ulcerated by the bloody repression of the new regime military against civilians.

More than 12,000 displaced people have fled in recent days air raids led by Burmese generals, according to the powerful Karen National Union (KNU), signatory of the agreement, which calls on the multitude of ethnic minorities in the country to unite against the junta. And, according to the Association for Assistance to Political Prisoners (AAPP), some 543 civilians, including more than 40 minors, have been killed by security forces in Burma since the February 1 coup. The number of children and adolescents killed has doubled in the last twelve days, lamented the NGO Save the Children.

The overall toll could however be much heavier: some 2,700 people were arrested. Held incommunicado, without access to their loved one or to a lawyer, many are missing.

An agreement observed by the organizations after the coup

Since Burma’s independence in 1948, many ethnic armed factions have been in conflict with the central government for more autonomy, access to numerous natural resources or a share of the lucrative drug trade.

From 2015, the army had concluded a national ceasefire agreement (ANC) with ten of them, including the KNU. Shortly after the coup, they said they would continue to apply this agreement, despite the passage of the generals into force.

But since then “hundreds of civilians, children, adolescents and women have been killed” by the security forces, Yawd Serk, head of the Shan State Restoration Council, one such group wrote on Saturday. rebels.

The KNU is particularly virulent against the junta. Responding to the bloodbath of the security forces against opponents of the February 1 coup, it had already seized last week of a military base in the Karen state in the south-east of the country, killing ten soldiers. The army then responded by carrying out air raids against the faction’s strongholds, a first for twenty years in this region.

“Many civilians died, including minors and students. Schools, houses and villages were also destroyed ”during these strikes, the KNU noted. “We urge all ethnic minorities in the country [qui en compte plus de 130] to take strong action and take sanctions ”against those responsible.

Junta spokesman Zaw Min Tun said for his part “to hope that the majority of KNU members respect the ceasefire”.

Other armed groups have already provided support for democratic mobilization and threatened to take up arms against the army. And the UN envoy for Burma, Christine Schraner Burgener, this week warned of an “unprecedented” risk of “civil war”.

In the meantime, the generals continue their murderous repression. In addition to the heavy human toll, arrest warrants were issued Friday against about twenty personalities of the country, including singers and models, according to state media.

Three members of a family, including two sisters, who had spoken to a correspondent for the American channel CNN who came to interview junta officials, were also arrested. “We pray that they are not killed,” one of their relatives told AFP.

The junta also blocked internet access for a large majority of the population, cutting off mobile data and wireless connections. Radio frequencies, SMS, applications that work without connection: the pro-democracy movement is trying to find ways to organize itself.