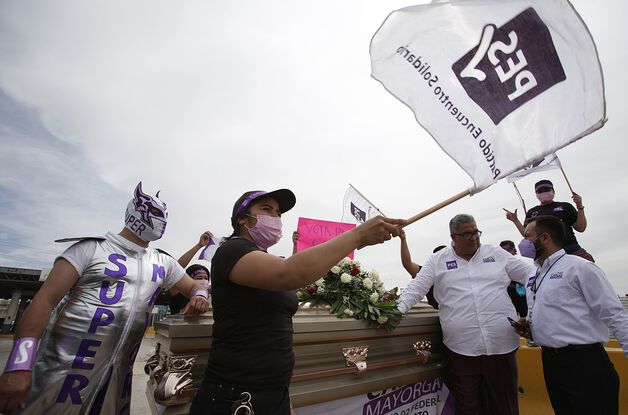 He wants to highlight the thousands of deaths caused by the coronavirus pandemic and cartel violence. Carlos Mayorga, candidate for the regional parliament of the state of Chihuahuan, in northern Mexico, launched his election campaign in a coffin.

The man explained on Tuesday that he “decided to launch this political campaign inside a coffin to send a message to politicians: they have a dead people, a city, a community, a city, a state dead because of their indifference. “

Covid-19 and the fight against crime

Carlos Mayorga arrived in a golden-colored coffin during an election rally held on a bridge between the Mexican border town of Ciudad Juarez and El Paso, in US Texas. He was accompanied by assistants dressed in biological protection suits and carrying bouquets of flowers to draw attention to the death toll of more than 200,000 Covid-19 deaths in Mexico, the third highest in the world.

After extricating himself from the coffin in which he lay, the candidate said politicians have also “remained silent about the high levels of organized crime”. Since late 2006, when the government launched a military offensive against drug cartels, some 300,000 people have been murdered in the country. The campaign for elections in the 32 states of Mexico, which began on Sunday, was also preceded by the assassination of 16 candidates.

In total, some 94.4 million Mexicans are called to vote on June 6 to elect 500 representatives of regional parliaments, including 15 of the 32 governors.