Republican elected conspirator excluded from several committees in the House 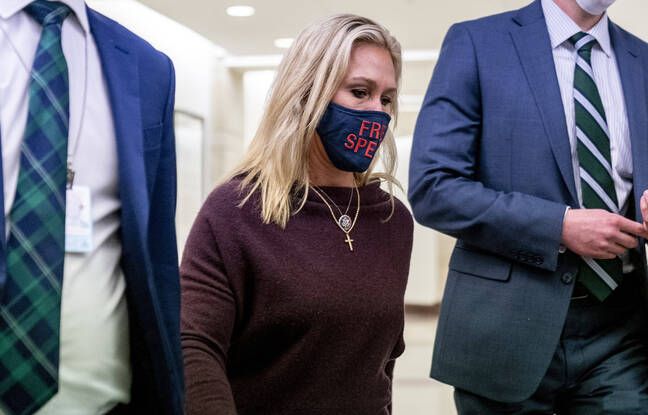 Message sent. On Thursday, the House of Representatives sanctioned a pro-Trump elected official who shared conspiracy theories, a vote that exposed the divisions within a Republican party still largely under the sway of the former US president. Georgia State MP Marjorie Taylor Greene was ousted from her seat on the Education and Budget Committees in a vote that largely followed partisan lines (230 in favor, 199 against).

Only 11 Republicans joined with the majority Democrats in the lower house of Congress, who notably denounced its past support for the theses of the QAnon conspiracy movement and its statements appearing to call for the execution of Democratic leaders. Even if the elected Californian Jimmy Gomez has announced his intention to table a motion to exclude “MTG” from Congress, his initiative seems doomed to failure: it takes a two-thirds majority that would require the support of 69 Republicans.

“I was able to believe in things that were not true”

Before the vote, the elected 46-year-old had made amends. “I was able to believe in things that were not true (…) and I regret it,” she said. Wearing a mask with the inscription “Freedom of expression”, she claimed to have “stopped believing” in conspiracy theories before being a candidate.

“These were words from the past” which “do not represent my values,” she said, accusing the media of being “as guilty as QAnon of presenting truths and lies that divide us”. But this act of contrition did not convince Democrats.

“No member (of the assembly) should be allowed to behave like Mrs Greene and risk zero consequences,” Democratic No.2 Steny Hoyer said in the debate leading up to the vote. Before the vote, Democrat Tom Malinowski warned that if the elected official obtained broad support from her camp, “violent extremists will see there another sign that they have a legitimate place in the national debate”.

Republicans, on the contrary, believed that she should not be sanctioned for statements made before she entered Congress in January. “No one supports what was said before this person became a member” of the House, said Republican Leader Kevin McCarthy.

” Who’s next ? “Asked Republican Jim Jordan, denouncing” a culture of banishment. ” Liz Cheney, number 3 of the party in the House, for her part denounced after the vote “a dangerous precedent for this institution that the Democrats could regret when the Republicans take back the majority”.

Before being elected, Marjorie Taylor Greene had asserted that the Democratic Speaker of the House Nancy Pelosi was guilty of “treason”, a crime according to her “punishable by death”. She had questioned the reality of several deadly shootings, suspecting staging to toughen gun laws, and questioned the fact that a plane crashed into the Pentagon during the 11- September. The Republican also claimed responsibility before her election to the pro-Trump QAnon movement, a far-right movement defending the idea that Donald Trump is waging a secret war against a global sect made up of satanist pedophiles.