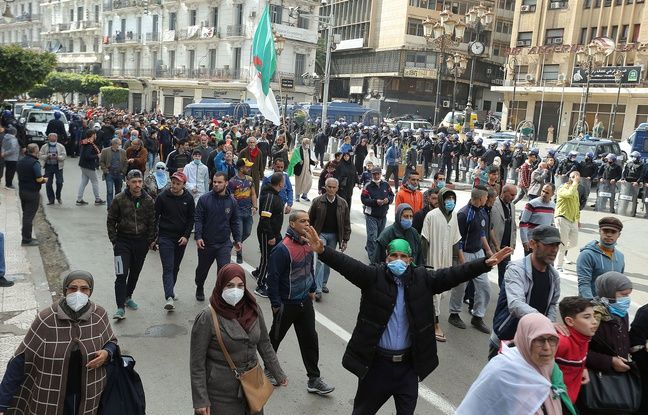 Riots broke out on Sunday evening in several neighborhoods of Ouargla, in southern Algeria, after the sentencing to a heavy prison term of an activist of the popular protest movement in Algeria, accused of “apologizing for terrorism”, according to the networks social and media.

According to the correspondent of the French-language daily El Watan in Ouargla, a city in the northern Algerian Sahara, demonstrators blocked several roads and burned tires after the local criminal court sentenced Ameur Guerrache, a blogger, to seven years of imprisonment. closed prison.

A video circulating on social networks showed young people throwing stones at police officers, in the middle of tear gas. Appeals for calm were launched on these same networks and the situation remained tense at the end of the evening. In another video also posted on social media, Ameur Guerrache’s mother implores Algerian President Abdelmadjid Tebboune to release her son.

“Sentencing to 7 years in prison against Ameur Guerrache”, had previously announced the National Committee for the release of prisoners (CNLD) on its Facebook page. According to this support association, Ameur Guerrache was condemned for “apology for terrorism”, “incitement to terrorist acts”, “attack on the President of the Republic” and “incitement to assembly”. The prosecution had requested 10 years in prison.

Arrested at his home on July 1, 2020, Ameur Guerrache, 31, presented as an activist and poet, is “one of the greatest leaders of the (protest) movement in Mekhadma for several years”, specifies the CNLD.

The Mekhadma movement takes its name from a deprived district of the city of Ouargla, where last June hundreds of people protested peacefully against their living conditions as well as their marginalization and exclusion from local development.

Ouargla is the capital of a wilaya (prefecture) rich in hydrocarbons, where there are many deposits, including that of Hassi Messaoud. But it is also a city where the youth unemployment rate is high. According to the official APS agency, the judicial police services had found a video of more than an hour in which Ameur Guerrache published live on his Facebook account “hateful sermons”.

“The respondent, who had also circulated calls to gather and images of weapons of war, was neutralized (note: arrested) at his home where were discovered a camera and a mobile phone containing the photo of a terrorist, ”adds the APS, without ever identifying the accused.

Algeria’s justice ministry recently announced that a total of 59 prisoners of conscience were released after the announcement of a pardon granted by President Abdelmadjid Tebboune on February 18. But, at the same time, convictions continue at a steady pace in the courts. Some 700 people were arrested in Algeria during the marches of the popular Hirak protest movement on Friday before they were all released, according to human rights organizations.