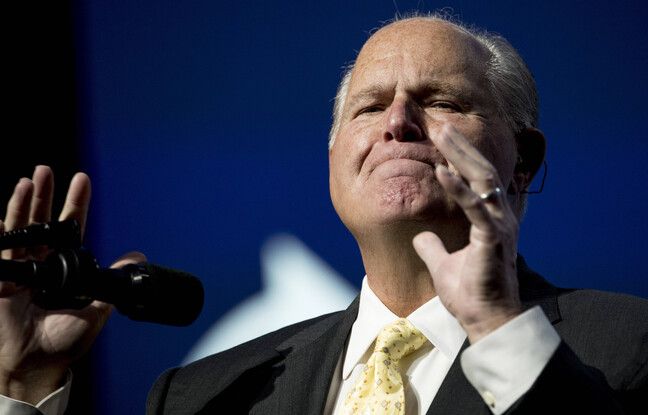 He was one of the most recognizable – and influential – voices in American political radio. Famous conservative host Rush Limbaugh, referred to by some Democrats as the true ideological leader of the Republican Party in the Obama years, died Wednesday morning from lung cancer. He was 70 years old, of which nearly 50 were on the air. With 15 million weekly listeners, the King of Provocation had built an empire of several hundred million dollars.

“Rush Hudson Limbaugh III will forever be the greatest and brave pioneer of radio,” his wife Kathryn said in a statement posted on the host’s official Facebook page. She announced her death on the air.

“Feminazi” and Obama the “socialist”

Along with Fox News’ Bill O’Reilly, Rush Limbaugh embodied the voice of the ultra-conservative opposition during the Clinton and Obama years, which he regularly referred to as “socialist.” At the time, Republican Party leader Michael Steele was forced to apologize after criticizing Limbaugh, who publicly wished Obama, a hideous “socialist”, “to fail.”

Rush Limbaugh, the controversial king of ultra-conservative radio talk shows, died of lung cancer at the age of 70. In 1995, he was on the front page of Time, cigar in hand, and the magazine asked, “Is Rush good for America?” #Rush pic.twitter.com/wpziZxi2kJ

Anti-feminist (he often raged against “feminazis”), climate-skeptic, playing on racial stereotypes or making fun of Michael J. Fox’s Parkinson’s disease to the delight of his audience, Rush Limbaugh was a fervent supporter of Donald Trump.

“He supported me from the start. (He was) a great gentleman, ”reacted the former US president by phone on Fox News. “He was a unique guy. He had extraordinary insight ”. Donald Trump presented him with the Presidential Medal of Freedom last year, the most important civil honor that can be bestowed on the United States, a decision that made progressives scream.