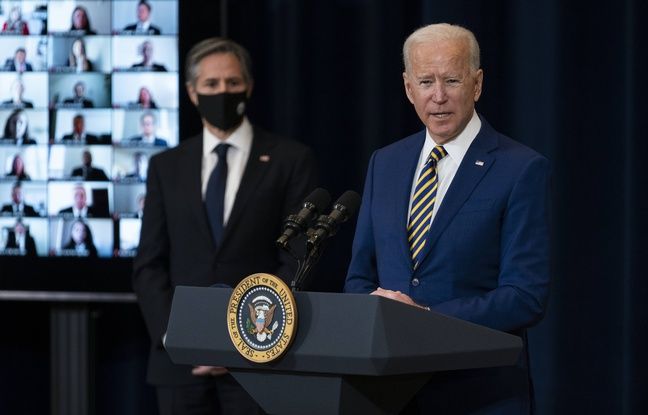 It is not yet clear whether to call this the “Biden Doctrine”. But on Thursday, the American president set the main lines of his foreign policy. Unsurprisingly, it breaks with the isolationism of Donald Trump and hardens the tone against authoritarian regimes.

Joe Biden on Thursday ended US support for the Saudi coalition in Yemen and froze the withdrawal of US troops in Germany, while initiating a change of tone towards Russia. “We are stepping up our diplomatic efforts to end the war in Yemen,” “which has created a humanitarian and strategic catastrophe,” the President of the United States said in his first foreign policy address to the State Department with Antony Blinken by his side.

“This war must end,” he insisted, confirming the appointment of a seasoned diplomat, Timothy Lenderking, as emissary for Yemen. “And to underscore our resolve, we are ending all US support for offensive operations in the Yemen war, including arms sales. “

Concretely, Washington will cancel the controversial sale to Riyadh of “precision munitions” decided at the end of the mandate of the former Republican president, who has always supported, against all odds, the Saudi kingdom, pillar with Israel of its policy anti-Iran. Calling into question this support for Saudi Arabia is therefore upsetting the balance of regional alliances and redesigning the United States’ strategy in the Middle East.

Riyadh heads a military coalition accused of many blunders against civilians in its intervention with the Yemeni government against the Houthi rebels, supported by Iran.

Without mentioning the end of American support for the Saudi-led coalition, the Saudi state agency said Thursday that Riyadh reaffirmed its support for “a comprehensive political solution” in Yemen and welcomed “the United States’ emphasis. the importance of diplomatic efforts ”to resolve the crisis.

The Houthis hailed the end of American involvement. “We hope this will be the start of a decision to end the war in Yemen,” Hamid Assem, political leader of the insurgents in Sana’a, told AFP. This decision could also be interpreted as a gesture of goodwill by Iran, which is preparing to enter into complex negotiations with Washington to save the Iranian nuclear deal from which Donald Trump had slammed the door.

“Is the United States ready to cut back the hundreds of billions of dollars in arms it sells in our region? Are they ready to end the massacre of children in Yemen? Iranian foreign minister Mohammad Javad Zarif asked CNN International earlier this week.

Although the return to the 2015 accord is seen as a “critical priority” by the White House, Joe Biden did not mention it in his speech.

The 46th President of the United States has also confirmed that he will “stop” the partial withdrawal of American troops from Germany, the time of a “global review of the posture” of the forces deployed abroad entrusted to the minister. of Defense Lloyd Austin.

Donald Trump had announced in June that he wanted to greatly reduce the American forces in Germany to 25,000 soldiers. This decision had caused a stir within the American political class as well as in Europe, where the allies of Washington, Berlin in particular, were abused during the four years of mandate of the billionaire New York. “America is back, diplomacy is back,” said Joe Biden. “We will rebuild our alliances”.

He defended the classic values ​​of American diplomacy – promotion of democracy and human rights – neglected according to him by Donald Trump. And to illustrate this “return” of “moral leadership” on the international scene, he announced that the United States would welcome as of next year 125,000 refugees as part of the resettlement program, an eight-fold increase from the 15,000. accepted this year, a historic low.

President Biden has finally shown his determination to counter China and Russia, accusing his predecessor of having been weak in particular with regard to Russian President Vladimir Putin. The United States must “be there in the face of the advance of authoritarianism, in particular the growing ambitions of China and Russia’s desire to weaken our democracy,” he said.

“I clearly told President Putin, in a very different way from my predecessor, that the time when the United States submitted to the aggressive acts of Russia (…) was over,” he said. added. However, he remained silent on the concrete measures promised by his national security adviser Jake Sullivan to make Moscow “accountable”. And has said almost nothing about its strategy against Beijing, yet unanimously considered as the number one strategic opponent of the world’s leading power.

“I will judge with my heart”, confides the president of the jury, Guillaume de Tonquédec