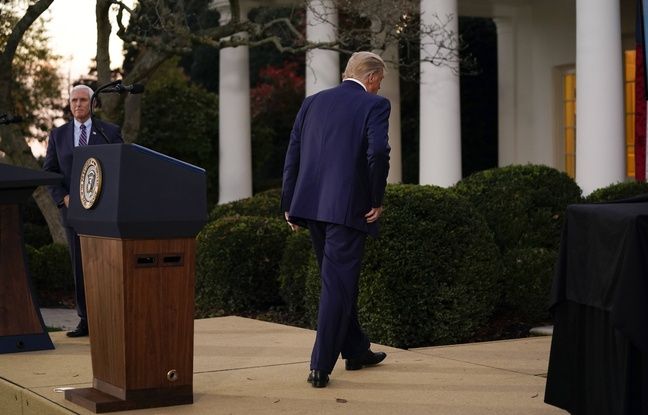 It does not work out for the American president. On Friday, Donald Trump’s campaign suffered three new legal setbacks over appeals filed to challenge the results of the November 3 ballot. Increasingly isolated, the US president encouraged his supporters to rally across the country this weekend to challenge Joe Biden’s victory.

In Michigan, on Friday, a judge refused to block the certification of the results, noting that observers challenging the tabulation of the votes had “not attended a meeting on October 29” where the process was explained.

A Michigan judge has denied the Trump campaign’s motion to cease certification of the vote in Detroit, noting that if the election challengers had attended orientation, they would know that what they were witnessing was routine.https://t.co/iU0BB9Wqoa pic.twitter.com/Wgos3XPUoX

In Arizona, Donald Trump’s lawyers were forced to withdraw their appeal, which had no chance of success in Maricopa County (Phoenix). The day before, many witnesses admitted that they were “not sure” that their votes had not been counted.

🚨BREAKING: The day after a full court hearing, GOP plaintiffs tell Arizona Court “Since the close of yesterday’s hearing, the tabulation of votes statewide has rendered unnecessary a judicial ruling as to the presidential electors.”

Finally, in Pennsylvania, a court ruled that accepting late mailings was not unconstitutional. The United States Supreme Court has yet to rule on this point, however. But even if those ballots were rejected, Joe Biden’s lead, which exceeds 40,000 votes, should be sufficient.

On Thursday and Friday, the US president accused the Dominion Voting Systems software, which equips voting machines in 28 states, of having “erased 2.7 million pro-Trump votes in the country.” But it was immediately disowned by the Cybersecurity and Infrastructure Security Agency (CISA). According to the latter, the election was “the safest” ever held, with “no sign” of hacking or accidentally changed votes.

Next week could however mark a turning point in its protest strategy, when Georgia was to have completed its recount, for a certification of its results expected on November 20.