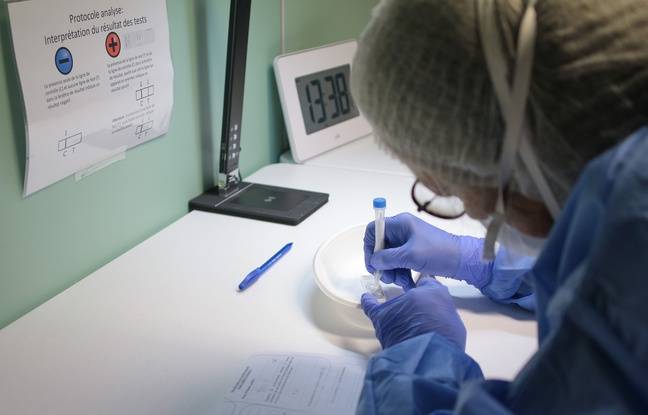 Several investigations have been launched in Germany against structures offering rapid Covid-19 tests. They are suspected of inflating the number of screenings carried out to obtain undeserved reimbursements from the State. “Those who use the pandemic to get rich criminally should be ashamed,” Health Minister Jens Spahn tweeted on Saturday, welcoming the opening of proceedings.

Whether with masks or testing – anyone who uses the pandemic to criminally enrich themselves should be ashamed. It is good that the public prosecutor’s office has started investigations into the individual cases that have come to light. (1/3)

The Bochum prosecutor’s office (north-west) on Friday raided premises and private accommodation linked to a company offering such antigenic tests, according to a spokesperson quoted by the daily Southgerman newspaper. The public prosecutor’s office in Lübeck (north) is also investigating “fraud” linked to “carrying out and invoicing rapid tests”, according to the weekly WirtschaftsWoche ; and the Cologne health authority visited a center on Friday for an unannounced check-up.

No supporting documents to provide

These tests, compulsory in several regions to frequent bars, restaurants, shops or even municipal swimming pools, were made free in March under federal regulations aimed at increasing the number of screenings. This provides for a refund of up to 18 euros per test, but several German media have pointed out in recent days the absence and impossibility of checks.

The centers do not have to provide the names of the people tested or other documents, such as invoices for the purchase of utensils. “It is enough that they transmit the number of tests, without any proof, and they receive the money transfer shortly after”, according to a joint investigation of the public televisions NDR and WDR, with the daily newspaper Southgerman newspaper, which started the case.

To detect irregularities, journalists counted people who came to be tested in several places in order to compare them with the figures transmitted to the authorities. The result: for a hundred screenings carried out, one center declared 422. Elsewhere, instead of 550, the company said it had done 1,743 in a day.

“Each Kebab stand can obtain a certificate”

Jens Spahn announced more controls to prevent some “taking advantage” of “necessary pragmatism” in the organization. Screening points, easy to open, have multiplied in recent weeks in Germany: in North Rhine-Westphalia, the largest region, the Ministry of Health has identified more than 8,000.

In Berlin, where there are at least 1,200, “each kebab stand can obtain a certificate” to offer tests, even blurted out to the newspaper Daily mirror the manager of several centers in the capital, on condition of anonymity. In reaction to the revelations, the city of Münster (north-west) withdrew the concession from a pinned company, which operates around fifty centers in more than 30 German cities.