The year 2020 was marked by the publication of several reports and studies highlighting the negative impact of brands on the environment; they advocate profound changes in business offerings, in consumer information and in the regulation of communication and advertising.

At the center of the French self-regulation system is the Professional Advertising Regulatory Authority (ARPP) and related bodies, such as the Jury of Advertising Ethics (JDP). Their role is to define the rules of ethics and to ensure their proper application by all players in the advertising sector (private and public advertisers, consulting agencies, broadcasters, freelancers, etc.), before and after broadcast, whether on television, in the press, on billboards, on social networks or even in a store window.

All ecological advertising arguments or claims that refer to the issues of ecological transition must, in theory, respect these rules, gathered in the “Sustainable development recommendation” of the ARPP.

In fact, more than 11% of environmental advertisements are not compliant, as shown by the latest “Advertising and environment” report, carried out jointly by Ademe and ARPP and published in September 2020. This is the highest rate for 10 years and significantly higher than other themes (0.2% non-compliance for eating behavior or image and respect for the person, for example).

In the event of a suspicion of greenwashing for an advertisement, any individual, association or institution can refer the matter to the Advertising Ethics Jury. This is what I strive to do regularly: 32 complaints filed since 2019, 22 deemed founded, 4 unfounded, 1 inadmissible, 5 in process. This allows me to point out certain irresponsible practices and to feed my research work on advertising regulation in France.

I note that several decisions taken by the Jury in recent weeks reflect a relaxation in the interpretation of ethical rules.

This shift in case law is worrying because it leaves more room for maneuver for brands to exploit the ecological argument disproportionately, to the detriment of consumer information and the fight against major issues such as climate change. .

Let us return to these recent opinions in three emblematic cases.

The advertiser is an automotive supplier who has invested heavily in the hydrogen sector. The advertising visual presents a glass of water on a blue background with the message “This is all that is thrown away by running on hydrogen”. 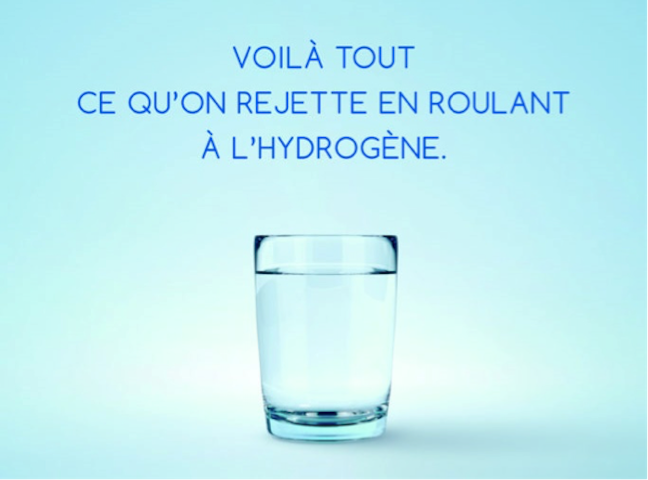 From my point of view, this claim misleads the public about the reality of the impacts of hydrogen technology and contravenes point 3 of the ARPP sustainable development recommendation:

So I reported this ad to the JDP. The president deemed the complaint unfounded, on the grounds that “the wording chosen clearly indicates that it is precisely during the rolling phase that the discharges are limited to water. “

However, the mention “while driving” is not synonymous with “while driving”, it has a much broader meaning. Moreover, in advertising, the advertiser promotes its “global hydrogen solution”, which concerns the different phases of manufacturing, storage and use of hydrogen, which have significant environmental impacts.

Moreover, if we adopt the logic of the JDP, advertising slogans such as “Eating meat does not contribute to climate change” and “By drinking this bottled water, I do not produce plastic waste” would comply with ethical rules! This is obviously absurd, a large part of the impacts linked to the products we consume come from the phases of extraction of raw materials, manufacturing, transport, end of life …

I contested the decision and the president of the JDP decided to submit this advertisement to the plenary session on May 7th. The notice will be published in early June. We will see whether or not he confirms the first reading which had been made of it.

A French company manufactures and markets webcam covers, called “cache-cams”. The advertisement, broadcast on the Internet, presents several models of caches arranged on a decoration of stylized foliage with the slogan “The useful, original and eco-responsible corporate gift”.

The “eco-responsible” ecological argument is repeated on the brand’s website with a pictogram of an Earth surrounded by a stem and two green leaves and the clarification that the products are made “from corn starch” .

I again approached the JDP on the grounds that the globalizing “eco-responsible” allegation, reinforced by the visual, is disproportionate and can mislead buyers about the real impact and the environmental qualities of these products.

The Jury rejected my complaint. He considers that neither the criticized allegation nor the visual in question are disproportionate in relation to the claimed qualities of the product and the environmental impact of the advertiser’s activity, and that they are unlikely to be affected. ‘mislead the public.

Without entering into the technical analysis of the environmental performance of corn starch, it appears that this opinion of the JDP is positioned in opposition to the case law in force.

Indeed, in the 2019 ADEME-ARPP “Advertising and environment” report, advertising visuals using a globalizing argument such as “ecological”, “responsible”, “eco-responsible”, “sustainable” are systematically classified as not in conformity with the Recommendation. DD, even when the product has real environmental qualities, certified by an eco-label.

Why should it be any different with webcam caches?

I contacted the editor of advertising ethics. My request was deemed admissible and a new procedure was launched. We will know in a few weeks whether the first judgment is upheld on appeal.

This third case concerns the affirmation of the naturalness of a product, in this case a cough syrup. I had seized the JDP to denounce the use of a green logo representing a leaf and accompanied by the term “natural”, positioned on the advertising visual, next to a photo of the product and its packaging.

On the left, the logo of the advertisement deemed compliant in 2021; on the right the one deemed non-compliant in 2019 © Mathieu Jahnich, CC BY-NC-ND

This complaint was also considered unfounded, the Jury considering that this presentation “is justified by the natural ingredients composing the product. […] by a mention at the bottom of the advertisement “with dry extract of marshmallow and natural honey” [et] by the reproduction of the conditioning which reveals marshmallow flowers and honey ”.

This opinion is contrary to the case law in force. In the same 2019 ADEME-ARPP “Advertising and environment” report, several advertisements using similar logos were classified as non-compliant with ethical rules.

I would add that in a previous “Advertising and environment” report (that of 2015), Ademe warned about the proliferation of self-declared pictograms and logos and their double negative impact (difficulty for the consumer to navigate; difficulty for companies genuinely committed to a sustainable approach to stand out).

This issue of logos and pictograms should therefore not be taken lightly by the JDP. Unfortunately, I did not have the time to contact the reviewer within the allotted time and this opinion is therefore final.

The ecological argument through and through

The analysis of these three cases shows a trend: a shift in case law in the direction of a looser interpretation of the Sustainable Development recommendation of the ARPP. It is a signal sent to advertisers and their agencies who will feel more free to use the ecological argument indiscriminately.

Remember that greenwashing contributes to the loss of confidence between consumers and businesses, that it is a brake on the deployment of real eco-innovations and that it sows confusion in the mind of the public on the reality of the efforts to be undertaken. and blocks the ecological transition.

While the sensitivity of the French on environmental issues is still as high (in second place of concerns at the end of 2020), as the bill resulting from the proposals of the Citizens’ Convention for the climate – which aims in particular to tighten the framework and regulation of advertising – enters into discussion in Parliament, that the pressure has never been so strong on the advertising-communication sector as to its commitment to ecological transition, this relaxation in the interpretation of ethical rules is regrettable.

This analysis was written by Mathieu Jahnich, independent researcher-consultant in marketing, communication and ecological transition and teacher in responsible marketing and communication at Sciences Po.
The original article was published on the website of The Conversation.