Signs of concern are growing over the advance of the Taliban 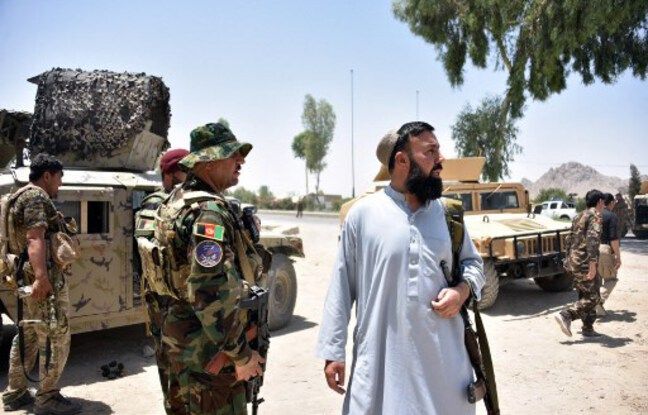 A defense system capable of intercepting rockets and missiles has been deployed at Kabul airport, the exit route for foreign nationals from Afghanistan, a further sign of concern over the inexorable advance of the Taliban, which is also reflected in the India’s evacuation of Indian staff from a consulate.

The Taliban have seized large portions of territory in the past two months, during an all-out offensive launched in early May in favor of the start of the final withdrawal of foreign troops from Afghanistan.

Kabul in the crosshairs?

Deprived of crucial American air support, the Afghan forces offered little resistance and essentially controlled only the main axes and the provincial capitals, many of which were surrounded by the insurgents.

Several districts in provinces neighboring Kabul have fallen into the hands of the Taliban, raising fears that they will soon attack the capital or its airport.

“The newly installed air defense system has been operational in Kabul since 2am this Sunday morning” (9.30pm GMT Saturday), the Afghan Interior Ministry said, without further details on this system which “has proved useful throughout the world to repel missile and rocket attacks ”.

Its spokesperson, Tariq Arian, simply told AFP that it had been installed at Kabul airport to protect airport facilities.

This defense system “was given to us by our foreign friends” who for the moment “make it work while we acquire the knowledge to use it”, said Ajmal Omar Shinwari, spokesman for the Afghan security forces, without naming the country concerned.

During its 20 years of presence in Afghanistan, the American army has deployed on its bases several C-RAM systems (Counter-Rockets, Artillery and Mortars), capable of detecting and destroying projectiles targeting them, as well as of giving l ‘alert. This type of system was deployed in particular on the huge base at Bagram, 50 km north of Kabul, returned to the Afghan forces in early July.

The Taliban have previously used rockets and mortars against government and foreign forces and their rivals from the Islamic State (IS) group carried out such an attack on Kabul in 2020.

“The Taliban have no structured means, but have shown that they can fire modified rockets from vehicles and create panic, especially if they target an airport,” said a foreign security source.

Turkey has pledged to ensure the security of Kabul airport when US and NATO troops leave the country by August 31. President Recep Tayyip Erdogan said on Friday that Ankara and Washington had agreed on “modalities.”

Worried about the fighting near Kandahar, India announced that it had evacuated Indian staff from its consulate in the large city in southern Afghanistan.

Kandahar province, the birthplace and historic stronghold of the Taliban, has been the scene of intense fighting recently. The insurgents seized the key district of Panjwai, about 15 km from Kandahar city in early July, and on Friday they attacked a prison on the outskirts of the provincial capital before being pushed back.

“The Consulate General of India has not been closed. However, due to intense fighting near the city of Kandahar, its Indian personnel have been withdrawn for the time being, ”said the Indian Ministry of External Affairs, citing“ a purely temporary measure, until the situation is stabilizing ”and indicating that“ the consulate continues to function thanks to its local staff ”.

According to a security source in Kabul, about fifty Indian employees of the consulate, including six diplomats, were evacuated, but their destination – Kabul or New Delhi – was not known.

Due to the fighting in northern Afghanistan, Russia recently closed its consulate in Mazar-i-Sharif, capital of Balkh province and one of the main Afghan urban centers, close to the border with Uzbekistan.

Beijing advised its nationals to leave the country and evacuated 210 of them in early July.

For its part, the Afghan Ministry of Refugees has called on Europe to stop deporting Afghan migrants over the next three months due to “the escalation of violence” and the spread of Covid-19.

Government calls on young people to join the army

On Sunday, the spokesman for the Afghan security forces tried to reassure, denying that the Taliban control 85% of Afghan territory, as they claim, an assertion impossible to verify independently.

“This is not true. Fighting continues in most areas “that the Taliban say they control, he said, while calling on young people to join the army, indicating that” the government had facilitated the recruitment process.

A statement that comes against a backdrop of the mobilization of militias by the government and the anti-Italian warlords, raising concerns of a new civil war.