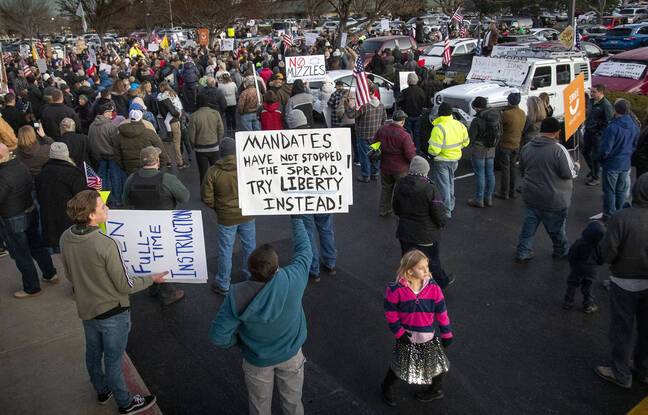 With the epidemic, a decline in freedoms? Faced with the Covid-19 pandemic, more than six out of ten countries in the world have taken problematic measures at the level of human rights or democratic rules, according to a report published on Wednesday
by the NGO International IDEA.

The study, which covers almost all countries in the world, concludes that 61% of them have taken at least measures considered to be “illegal, disproportionate, without time limit or not necessary” in at least one relative area. democratic freedoms.

43% of countries considered democratic would be affected

For the regimes considered democratic, they are 43% to fall in this category, while it rises to 90% for the authoritarian regimes, according to the NGO based in Stockholm, specialized in the state of democracy in the world.

If the conclusions were predictable for authoritarian regimes, “what is more surprising is that so many democracies have taken measures that are problematic”, told AFP the secretary general of the NGO, Kevin Casas-Zamora.

It is India – a democracy – which emerges at the top of the world ranking, with measures deemed “worrying” in 9 of the 22 areas analyzed (freedom of movement, expression, of the press etc.), ahead of the Algeria and Bangladesh (8).

The NGO sifted through the various measures taken around the world to determine whether they were problematic, from a purely democratic point of view and without taking into account health efficiency.

In the European Union, five countries are mentioned: Bulgaria (3 areas), Hungary (2) as well as Poland, Slovakia and Slovenia (1). Among the major Western democracies, only the United States is pinned – in two areas. Israel (5) and Argentina (2) are also among the poor performers.

Restrictions on press freedom in the name of the fight against disinformation, excessive use of force (deployment of soldiers to apply the rules, internment camps for sick people, etc.), corruption in emergency supply contracts or still questioning migrants as responsible for the epidemic are among the most frequent concerns, explains Casas-Zamora.